Before bed last night, I played Christian Mayr's contest module, Being Good. As you'll see, I had a lot of fun playing through this strange little module. 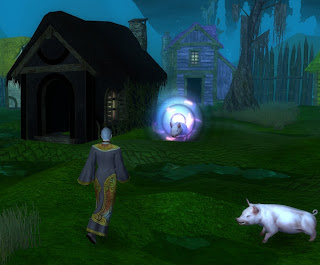 Christian Mayr's first module release, the delightfully bizarre Asylum: A Bet, A Corpse, put him on the map as one of the more ...non-traditional builders in our community. This module does nothing to change that peception, though instead of the dark foreboding of Asylum, the mood Being Good is decidedly light and fun. If I was going to try to describe this module via comparisons, it would probably be something like a blend of Grimm's Fairy Tales, Hitchhikers' Guide to the Galaxy, Looney Toons, and yes, Batman . It's extremely funny, particularly near the beginning, when I literally was laughing so hard I had to rest my head on my keyboard wrist support. Mayr continues his use of extreme lighting and tinting in places, though it wasn't so severe in this module as in his other module, and actually makes for an appropriate effect early on. In addition to the bizarre concept, what really made this module stand out the use of custom sounds and music, which set a tone completely unlike anything you'd get using stock nwn2 content. 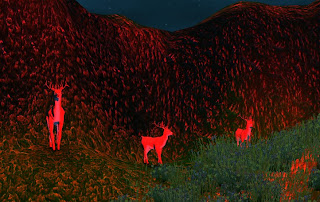 The module plays out well and is fun, even though it's pretty short and is essentially an "adventure"-style game (there isn't any real combat) with very little in the way of challenging puzzles. The story is creative, and everything makes sense in a twisted and absurd kind of way. The one possible critique I might have would be that the writing is still a bit awkward at times, though it's actually quite good for a non-native English speaker and seems to be substantially improved from the (somewhat early) version of Asylum that I played. Thanks again to the author for a fun little module, and I continue to look forward to the next Asylum module!