The Subtlety of Thay

As I mentioned last night, I finally finished Subtlety of Thay. I say finally not because I was relieved to be done, but because I'm so impressed at how long this module is. I didn't keep track of my game time, but I'd estimate it took well over the estimated 8 hours Dirtywick projected. Maybe closer to 12 or 15?

Below are my comments. As seems to be typical, I'm about a point more conservative than most voters, for whatever reason. In this case, I think this probably could have been a genuine must-have module, except for some of the polish problems I encountered (minor bugs, typos, and area design issues). Nevertheless, it is absolutely one I'd recommend to everyone and anyone interested in NWN2 mods. 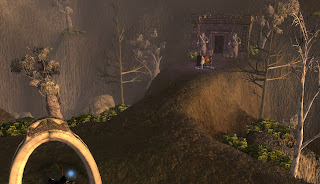 Subtlety of Thay is a tremendous module that is easily among the top two or three mods I've played thus far for NWN2. It has a wonderful story. What begins as a simple fetch and retrieve quest becomes a problem of epic consequence, ultimately causing one's character to play a pivotal role in a conflict between two nations. That might sound a bit generic, but the details of what happens are very creative and engaging. There are a variety of interesting and well-developed characters that are deftly interwoven into the story as you progress through the module. Several of them become companions, at least for a time, and there is a great deal of well-done banter between party members, as well as between the PC and these NPC's. The plot is executed very well, with excellent pacing and good justification for almost everything that happens. The story is generally linear, especially once you get past the initial quest. That said, I almost never found that it felt railroaded, because the need for an urgent course of action was always justified by the story. 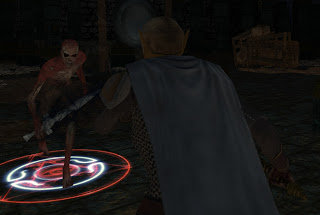 Stylistically, the writing is excellent, though there were a fairly large number of typos in the version I played (these may have since been fixed--and if not, I'm forwarding a long list of these to the author--check your @aol email). There was also one conversation in which about ten new obscure names of people, places, and organizations were mentioned in rapid sequence, and I got totally lost. For the most part, however, there is plenty of exposition for someone with only marginal Forgotten Realms Lore skill (like me) to understand what was going on. Furthermore, the dialog options were well done, with numerous hidden skill checks (I found this a nice change from the typical declared skill checks we usually see) that dictate both whether you see a particular option, and whether you are successful with a particular line of conversation. 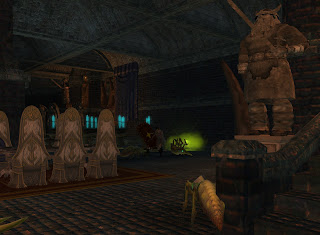 Combat was generally very well balanced, varied, and fun. I was particularly fond of the final series of battles, which required a bit of puzzle-solving in addition to good strategic combat. It became very important to have both cold iron and alchemical silver weapons, even early in the module, and switch between them was a common necessity--it really enhanced the strategic element of combat, which I loved.

Almost all of the combat areas, be they dungeons or external environments, were interesting and creative. There was, however, one dungeon area that was not much fun. It contained a repetitive series of "filler" spawns that included a type of monster that I would argue should never be used as filler, as they're just too interesting for that. It also contained a long but very narrow corridor with a huge number of very easy, but still very annoying little critters. I understand what the author was going for in this sequence (I think), but the result was that I felt I was battling nwn2's pathing as much as I was these animals--and the fact that they kept respawning over and over again made it even more of a chore.

Nevertheless, in the grand scheme of things, these critiques are very minor. I would absolutely recommend that everyone play this module that is interested in NWN2 mods. It's a tremendous debut effort by a first-time modder, and has me very excited to play the sequel when it is eventually released. Thanks for a genuinely great module!