Witch in the Wood: A Grimm Fairy Tale

Last night, I played Lord Niah's contest module Witch in the Wood: A Grimm Fairy Tale. It's an enjoyable little adventure. My comments: 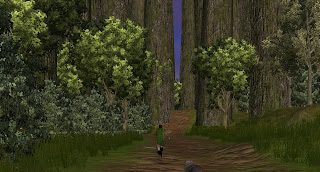 Witch in the Woods is a very short, but still enjoyable little adventure. While it is more true to the classic tale it is based on than some of the other contest modules, it still takes liberties with the story to spice things up a bit. As the readme indicates, the best fit for this module is a ranger, as essentially you are tasked with tracking down two lost kids and saving them from whatever fate has befallen them. 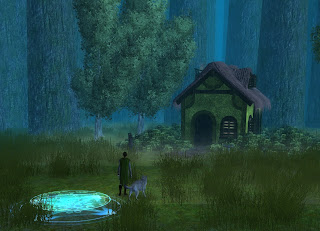 The highlight of this module is its custom scripting, which includes an interesting "search" system in which you can check an object (like a hollow tree stump) for items or other bonuses using your search skill, as well as a few special-use items. It's a nice variant from the typical "click to open and loot" approach that is the default in nwn2, especially in this setting (a forest). The writing is good, and the plot is decent even in its brevity, with a (sometimes humorous) twist or two to keep it interesting. The action was fairly easy for my ranger (a level-3 character might have been better balanced), but I like that what combat is there fits the setting, without any obvious "filler." Finally, the area design is fantastic. The author makes great use of scaling to create a gigantic redwood backdrop, beneath which lies a thick understory. When coupled with the ambient noises of an untouched wilderness, the module gives a great sense of walking through a thick forest.

The reason I "only" give it a qualified recommendation is that, at about a half-hour of game time, it is such a short module; it seemed to just be gaining some momentum by the time that it ended. You could probably describe the whole module as something that would make for a fun little side-quest in a larger adventure. I understand the constraints that the author worked under, of course, so this is understandable. But one thing that might have made this module more enjoyable is if the tracking phase of the module had a bit more meat to it. As it is, while there is some effort to include spot checks for signs of the kids, you basically just stumble upon the children. Perhaps if something more akin to the tracking system used in Kale's Rangers (NWN1), or even the "chase-the-odor" sequence in Stormchaser, had been used, it might have been a bit more dramatic when one finally locates the house.

Overall, though, it's a fun little module and is worth checking out, as long as you are aware of its limitations.