Below are my comments on Nestlehaven. It's clearly among the best modules yet produced for the Vault. If the sequel can fulfill the promise of this first effort, we could be in store for something very, very special. It's exciting to see content like this coming out for NWN2--it shows much of the tremendous power of this modding engine while living up to the rich history of story and setting than we have in the NWN community. It most certainly falls into the "must have" category of NWN2 mods, and I've only said that about one or two other modules... 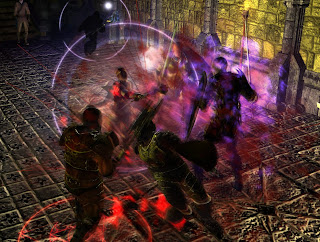 My Vote: 9 - Outstanding, A Must Have
Character: lv. 9 human neutral good cleric from Keep on the Borderlands, advanced to lv. 13
Module Version Played: jul20a6

Night Howls in Nestlehaven borders on groundbreaking, at least for the still-young NWN2 modding community. The crowning accomplishment of this module is the realization of Nestlehaven as a living and breathing town. Jackyo123's Nestlehaven has a rich history dominated by two ruling families, the Boroldi (who wear blue) and the Bellerose (who wear red). The two families are evenly matched and have an arrangement to share power within the city. But it is an imperfect arrangement between two very proud houses, and the result is a history of tension that periodically boils over into genuine feuds. Now is one of those times, and the player character is invited by Nestlehaven's constable to help solve the mystery behind a series of gruesome murders that nearly have the ruling families at each others' throats.

The Capulet vs. Montague-esque split between the families dominates almost every aspect of the town of Nestlehaven. Most residents are allied with one of the two families, and they wear their affiliations on their sleeve--literally--by wearing their family's colors. In fact, in what I thought was a masterful stroke by the author, the citizens go so far as to paint the roofs of their homes to match the colors of their chosen families. The result is a town that feels divided, yet at the same time, tied together by their richly intertwined history. 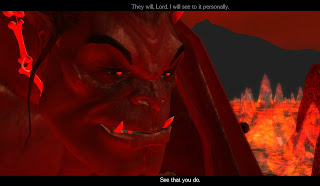 Much of the first half of the module has the player exploring the streets and buildings of Nestlehaven, which feel alive thanks to a tremendous amount of detail. Commoners, many of which are customized well beyond the level we typically see in modules, move about the city muttering their opinions about current events. Many, if not most, buildings are enterable despite being unrelated to any of the various main quests and side quests (as an aside, while my character felt right at home in this mod, I think it would actually be best played as a chaotic mercenary-type, rather than a do-gooder, so that one would feel liberated to explore/plunder all the various private residences that one can explore). And there are wonderful variety of interesting minor encounters, both violent and pleasant, that one can experience while one explores the town. There are only a few modules for NWN1 that were able to create such a palpably alive city for you to explore...and they often were among my favorite modules, including Cormyrean Nights, Threat of Dreams, and Almraiven, among others. And there's nothing else like it available for NWN2, official campaign included.

All that praise actually leads to my primary critique of the module. While the setting of Nestlehaven is fabulous, and sets up a wonderful opportunity for political intrigue and espionage, it ultimately felt a bit tangential to the main storyline. In fact, while the first half of the module will have you exploring the many interesting locals within the city, most of the second half of the module has you either fighting baddies in the surrounding forests or trudging through the many dungeons underneath Nestlehaven fighting all manner of demons and undead. The only time one has a serious encounter with the leadership of one of the ruling families is during a bizarre mandatory fetch quest, which felt a bit tacked-on. Furthermore, what starts as a very open-ended module becomes almost railroaded in its linearity near the end. The main story itself isn't bad by any means, and is generally well-executed, but it seemed a bit generic...especially when laid in contrast to the potential richness of the feud between the two ancient houses. It's not the case that main story has nothing to do with the families. It's just that it feels like more could be done to take advantage of the fabulous potential conflict that the author created.

There is a LOT of fighting in this module. It's not really repetitive, because the author does a brilliant job of creating customized enemies--not just his customized and creative monsters, but even the various "thugs" and "guards" that you'll meet have individualized equipment, looks, and character descriptions, with few duplicate individuals to be found. However, I thought that most of the encounters "felt" like boss battles, often with 6-7 foes that one has to cope with at once...and this resulted in my party spending a bit more time in combat than I found enjoyable, especially during the last hour or two of gameplay. Furthermore, many of the actual boss battles felt a bit anticlimactic, probably because of the elaborate fights against the various squads of minions. 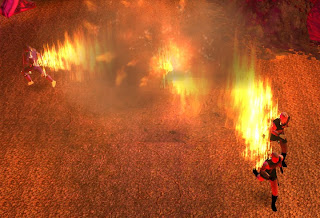 Fortunately, my party of 5 was always up to the task. I found combat to be well-balanced for my lv. 9 cleric, though I did play on normal difficulty most of the time to offset her low level. Blasting away with lightning and fireballs without friendly fire may be cheesy, but it makes combat a lot more fun for me--and makes fights go by a lot quicker. There were only one or two times when it probably made the combat easier than the author intended.

Critiques aside, this is a fantastic module. And as first modding efforts go, this is among the most impressive I've ever seen. The attention to detail here is mind boggling, the setting is fabulously realized, and I can't wait to see what happens in the sequel. After all, this is just the first chapter in the story, and the author clearly has a plan for where this is going. Many of the encounters in this mod, for example--especially those with the ruling families--clearly foreshadow more interesting encounters and plot development still to come. I'm really looking forward to it. Thanks for the great module!