The Flight From Death

Last night I played another small H&S, The Flight From Death. Here is my vote & comments:

My vote: 5 - Fair, Solid yet Unremarkable.

I like the basic concept, which is that you've been imprisoned for a crime that you didn't commit and have to escape. There are also some efforts at the beginnings of a story here, and some basic roleplaying. For example, it seems as though one aspect of a conversation varies depending on your character's class. I also was pleased to see that a companion is available and functional -- this is the first community module I've played that uses one. 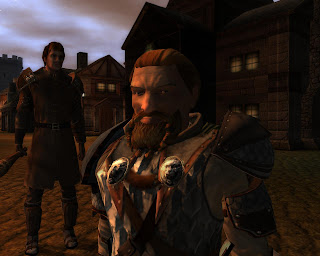 But I think this mod could be improved greatly with some adjustments. For example, the spawning design seemed a bit off. Spawn triggers were placed just past the entrance of many rooms. While functionally this works fine, the effect was that guards appeared out of thin air, which just seemed weird--not to mention was frustrating at times, because I couldn't tell where the guards were until after I entered the room. Area design might also be improved a bit. Interior areas are nicely decorated, but the outdoor areas were completely flat--and noticeably so. Granted, it's a city, but few cities have perfectly flat ground. Adding more variety to the profile -- even a small channel in the center of the street--might spice the place up quite a bit. Also, the doors in the city do not connect to anything (I'd recommend plot locking them instead with some pop-up text explaining there's nothing of interest inside), and there even appeared to be a backwards door in one of the dungeons.

Still, it's a promising first effort, and I thank you for sharing it. -B