Just thought I'd pass on congratulations to the Ossian Studios team, whose module Darkness over Daggerford won the best RPG module award at the 2007 Independent Games Festival Modding Competition. Readers may remember that Challseus's similarly groundbreaking (though for different reasons) module, Rose of Eternity - Chapter 1: The Coming, won the 2006 modding award.

Daggerford is now in line for the 2007 Best Mod award this March (hat tip to Maximus at NWVault). Also, rumors have begun to circulate that Ossian might be working on something NWN2 related for it's next project. I'll refer you to a wonderful little rumor-mongering post by Lariam for that reference. :) 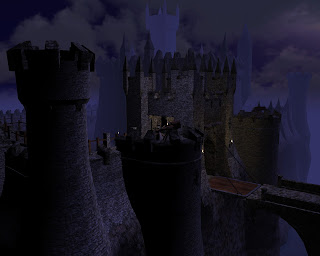 I had the pleasure of writing the Vault review of Daggerford. While it may have a few faults, it really was a groundbreaking module for NWN1. It offers players the chance to explore a wide-open landscape full of intrigue and adventure to a degree that is unmatched by any other module. All I could think of as I played it was how similar it was in feel to the original Baldur's Gate. The score it received in my review is the highest I've given among the 11 modules I've formally reviewed for the Vault.

As a sidebar, I spent last night playing a surprisingly good module, Avendale. From what I've seen of it thus far (2 hours into it...I play slow), it's an extremely solid little module and makes for a wonderful first adventure for a player or party. Looking forward to finishing it up tonight.
Posted by Berliad at 1:44 PM