Also among modules that I played over a week ago, but never got a chance to write comments for, is Daark Twins by E. C. Patterson (aka ciViLiZed). Despite what you might assume from the author's 133t-speak handle, this was a well-done module, with professional-feeling polish and a surprise at its end. My comments: 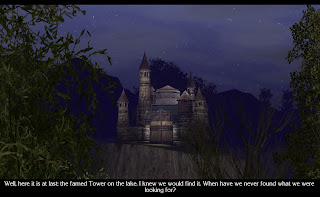 There haven't been very many modules for NWN2 that have deviated from the standard hack 'em up plus story rpg standard. Don't get me wrong, I enjoy the traditional rpg's, but it is nice to play modules that march off the beaten path now and then. Daark Twins is one of those modules. It's essentially linear, though there are a few possible endings to the module. But it essentially plays out as a series of challenges. Some of these do involve combat, but others involve either puzzles or tough decisions. What holds it all together are a decent little story (with a surprising punch line), as well as absolutely superb area design. 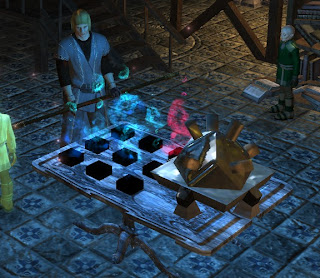 Attention to detail is fantastic. Walking through the forests, you'll see wolves scamper out of your way and run down a wildlife trail. And some of the visuals in this module are spectacular, especially in terms of how skillfully lighting is used. There's a castle on an island in the middle of a lake that is simply breathtaking, as well as a beautiful puzzle that makes great use of the visual effects editor (I'm guessing). The writing is also very good.

The only real critique I have of the module is that it seems a bit anticlimactic. Granted, it is a contest module, and therefore had to be short to satisfy the contest rules, not to mention the limited time in which it was built. But after everything one works to do to get to the ending, the final encounter was rather tame. And even though the ending of the tale is surprising and unexpected, I still didn't feel completely satisfied after playing it. That said, it's still absolutely worth a look. It's polished, enjoyable, and perhaps best of all, different. Thanks for sharing the module, and I hope to play something more of yours in the future!