I meant to post about this when it happened, but forgot. Anyway, Rob McGinnis posted yet another really exciting update to his blog this week. 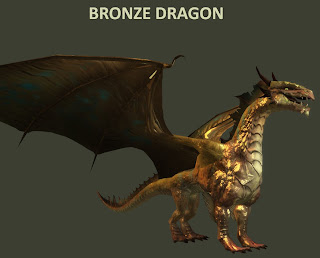 The piece of info that has gotten the most attention is the surprising addition of Bronze Dragons to the toolset as of patch 1.07. There has been a lot of criticism of the fact that only two dragons were included in the original release. I've always found that a bit of a strange criticism--the tinting and scaling capabilities of the toolset allow you to do an awful lot with the two models that are available, and I'd much rather have them flesh out some of the other underrepresented monster categories (golems, shapechangers, etc) than focus on more dragons. But whatever, I'm certainly not complaining about getting free content. This should make a lot of people happy--and it is a gorgeous model.

These, particularly the dm_setvar* series, are absolutely essential for players, as they allow us to get around occasional variable-related bugs in modules. They don't happen often, but I still probably used them 10-15 times in modules over the past few years. Without these commands, I'd otherwise have to reload from an earlier part of the module, or even worse, restart from scratch. This is a big improvement--kudos to Obsidian!
Posted by Berliad at 6:28 PM