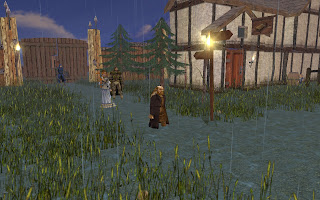 I opted to start playing through the Aielund Saga again. The plan, I think, will be to walk through Saleron's Gambit, The Prophet, and Aielund more or less simultaneously, switching off at the end of each chapter of each series.

I never finished Aielund, though I played through at least the first several chapters and enjoyed it. Going back, I've been surprised to see it's been given a major facelift. Many of the areas have been reworked to include placeables from Darkness over Daggerford, and it fits beautifully.

Furthermore, I'm really enjoying how well it plays. My first two sessions were pretty linear, but as I ended tonight the sidequests were piling on fast! I'm not really sure what I'll do next. It's lots of fun, as many involve new areas to explore.

I'm also playing a fighter. I often look down on fighters, but there's no denying that it's fun to play the badass tank now and then. I love that he gets so many feats--makes me feel free to explore several weapon types (bastard swords!), feats I rarely take, etc. He's pretty smart, but unlike many of my characters, he (a dwarf) has a penalty to his charisma, so he misses many of his persuade checks. Somehow, that makes it all the more fun.

Anyway, more later. Time for play has been more rare since the semester started, so I cherish these rare chances..
Posted by Berliad at 10:20 PM