I'm putting together a level 2 adventure for when my band of four adventurers finish up the Twisted Halls.  I'm largely going to stick to the stock materials in the Monster Vault (I think), but I wanted a non-dragon solo monster for this adventure.  So, I put together my first custom solo creature.

Set up: the adventurers are entering an actively used mine.  As a minor (miner? haha) quest, the mine foreman asks them to try to figure out what happened to one of his miners.  The adventurers walk through the mines and come upon a "break room."  The room is a part of a cave that ends in a pristine underground river with good drinking water.  The room includes bed rolls, a campfire, stools, a make-shift picnic table, etc.  Miners often use this room to eat, sleep, etc.

Adventurers will notice that there is an abandoned pick-axe near the shore.  As they approach the shore, a gigantic crocodile leaps from the water.  If you've seen Crocodile Dundee, you might remember a similar scene involving a water bottle.  If the crocodile makes a stealth check against the characters' passive perception, it gets a surprise attack round to open combat.  Here's the monster: 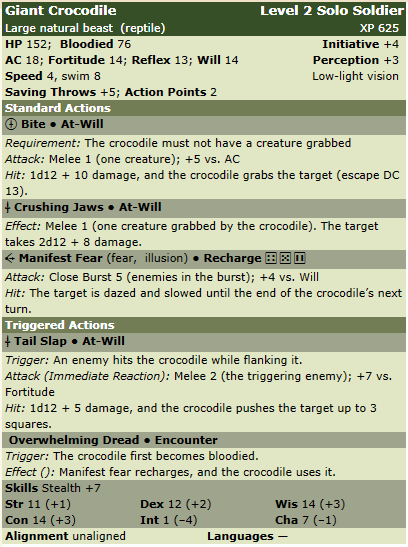 As you can see, it's the crocodile from the DM kit, lowered to level 2, solo-ified, and then granted some special features from the Id Fiend (lv 1 solo from Dark Sun) and a fledgeling dragon.  I also increased damage to be comparable to that of a dragon.  I think it'll be a fun monster to face, though I may need to playtest it before I throw it at them in case it's too powerful.

When they defeat the monster, adventurers may cut open his gut to find a treasure parcel, which includes a locket bearing the lost miner's name. Returning the locket completes the quest.
Posted by Berliad at 10:46 PM