Here's another character app for a game that fizzled before it get started.  I really like this one.  I'd just read Erik Scott de Bie's Shadowbane at the time I wrote this, and used that book to frame his background.  The game was to be set in the Neverwinter 4e campaign setting, and I think would have been a lot of fun.  I may hang onto him and submit him for the next Forgotten Realms game I see that seems to have promise.

And yes, I know, another character who has lost his parents.  But when you're born in Luskan and fall into the Dead Rats, that's almost a given, isn't it? 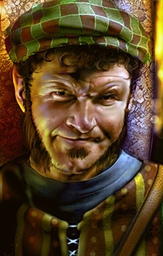 Physical Description and Personality: Small, even by Halfling standards, Pery stands just shy of four feet tall, with a mop of dark brown hair that he keeps tucked under his trademark green checkered cap. Nevertheless, he exudes a combination of delightful charisma and bravado that many find charming. While his language betrays his upbringing on the chaotic streets of Luskan, and his blue eyes tell of an eventful life, he nevertheless manages to portray himself as pleasant and, when circumstances allow, almost happy-go-lucky individual.


Background: Pery was born on the streets of Luskan. He doesn't know much about his parents. He has blurry memories of his mother from early in his childhood--one night, she just didn't come home--and he knows nothing of his father. From an early age, he had to make his own way. Even his last name is his own design--he borrowed it, as he'd "borrowed" many things in his life--from a temple dedicated to Tymora in southeast Luskan.

If one is to survive on the streets of Luskan as a child, one has little better prospects than to fall in with one of the local street gangs. For Pery, that was the Dead Rats. By age 10, he was scrubbing the floors at the Drowned Rat Tavern, and by his late teens he'd graduated to the role of a minor thug within the gang. His days were filled with the usual: extortion, theft, bullying, and so on.

He continued to move up through the ranks, and his prowess with his words and blade eventually caught the eye of Toytere: King Toy, the captain of the Dead Rats. In a ceremony in the dead of night, Toytere infected Pery with lycanthropy, granting him admission into the inner circle of the gang--an honor shared by only 20 others.

Gang life wore on Pery, though. While he enjoyed the mayhem and intrigue that went with the job, the brutal reality of the enterprise was a poor match for his sensibilities. He'd pulled himself up by his bootstraps with no small help from Lady Luck. But his duties to the gang required that he erase the limited opportunities of others.

One night, Pery was ordered to conduct an assassination. It would be his first, and success would undoubtedly raise his stock even further within the gang. Nevertheless, the target was guilty of little more than the loss of a small treasure when he was ambushed while serving as a courier. When Pery arrived at his target's house, the man, his wife, and his children were eating what passed as dinner. Pery just couldn't do it. Instead, he helped the family escape from town in the dead of night. Just as they were about to clear the walls, a group of Dead Rats jumped them. Pery held them off long enough for the family to flee--they were headed north toward Ten Towns--but the halfling was overmatched.

It's hard to explain what happened next. One moment, he was diving back, fleeing from the Dead Rats' enforcer as she spun her horrible axe toward his skull. The next, he was on his back in the snow. It was summertime in Luskan, so he knew that something unexpected had happened. Furthermore, as he sat up, he saw no signs of his former allies; just a cold, vibrant, frost-covered forest.

What happened next? That's something that Pery doesn't talk much about. It is clear that he entered into a pact with a powerful entity of some sort in that forest. And with that pact, he received a new set of powers, including a rapier covered in frost that he can summon into his hand at will, humming and quivering with energy. With those powers, of course, came equally powerful commitments.

After the deal was made, his patron returned him to Faerun, though fortunately a bit further to the south, near Port Llast. From there, he made his way to Neverwinter, joined an adventuring guild, and had begun to carve out a minor niche for himself as someone who could get things done. It was in this capacity that he received the summons from Belias Grigor, requesting his aide in an act of community service.
Posted by Berliad at 11:00 PM