Review: The Herald by Ed Greenwood 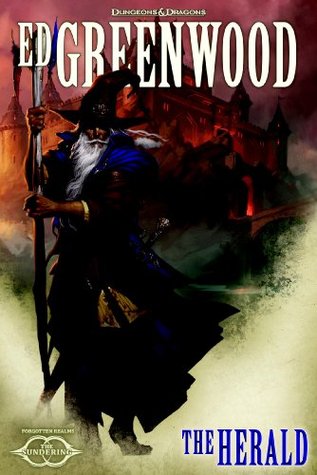 While the events of the other Sundering novels occurs, and while the deep-pocketed Netherese march on the elven city of Myth Drannor, Elminster and his close allies are instead focused on a smaller, yet no less important task: traveling from site to site around Faerun and strengthening the anchors between the Weave--the field of energy from which all arcane magic is derived--and Faerun.  Such subtlety cannot last long, however, and soon the heroes are wrapped up in a mighty struggle that spans across much of western Faerun.

The Herald is a fast-paced action novel that tells a critical story within the events of the Sundering.  While many questions go unanswered--indeed none of the novels really address the issue of Toril separating from Abeir, in particular--it is nevertheless a fun and fascinating romp through many classic locations within the Realms.  This was my first Ed Greenwood book, and from the reviews and comments I've seen it is one of his best.  Yes, the dialog, the battles, and the themes are often over-the-top.  But it's a really fun ride, and showcases two treasured areas of the realms: Candlekeep and Myth Drannor.  The pacing is superb throughout, with twists and turns that have me oscillating between despair and exhilaration at the author's whims.  It's not quite to the extent of a G.R.R. Martin story, but there are enough ups and downs that it appears no one--and no where--is completely safe.  The book had me up late turning pages many nights.

As someone new the Ed Greenwood's books, I found it pretty easy to step into the story.  I did find it helpful to hop onto the Forgotten Realms wiki to better understand a few of the characters after completing the book (especially the Srinshee!).  But even without doing that, I had little trouble following the story and understanding the stakes.  It's a good place to jump into Greenwood's series, and a fun wrap-up of the Sundering novels overall.  Having read the entire six-book series, I am eagerly looking forward to the Forgotten Realms campaign setting guide for 5e to get a more comprehensive overview of what has happened to each location.  It will be fun to read about each location that we've visited over the past six novels.