Book Review: Mrs. Frisby and the Rats of NIMH 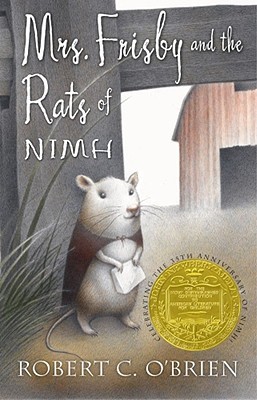 My daughter and I read this back-to-back last week.  The last time I'd read it was when I was about her age (3rd grade).  The book is fantastic.  It provides a wonderfully imaginative, detailed world that feels inherently "real."  The ties to the actual biology of its animal characters -- mice, rats, crows, and owls -- feel real, even as we give even the "ordinary" versions of these animals credit for far greater intelligence and communication systems than they probably have.  The truly extraordinary individuals, whose uniqueness stems from their relationship with the mysterious NIMH, are introduced late enough in the story that they still feel natural, organic, and true.

Everyone loves the rat Justin in this novel.  But I actually found Mrs. Frisby to be a really good character.  She's a recent widow and single-parent of four children.  Nevertheless, despite the book presenting a fairly old-fashioned culture of male and female roles in these animal societies, Mrs. Frisby doesn't balk at her role as sole provider for her family, nor does she shy away from the frequent dangers into which her predicament forces her.  She's no daredevil, but she always does what is needed, without any more than a second thought.

A big chunk of the narrative is told as a story-within-a-story.  I often am not a big fan of this approach, but it worked really well in this book.  If the story was told chronologically, starting with the mice and rats at NIMH, it would be far harder to focus on the plight of Mrs. Frisby's family in light of the other story.  And by keeping the narrative on her family, the Rats of NIMH always maintain an air of mystery.

So, kudos, Robert C. O'Brien.  This is a great example of a book that is just as dramatic and exciting to an adult as it is to an 8-year old.  I've now read the book at both ages, and it will remains one of my favorites.
Posted by Berliad at 1:09 PM