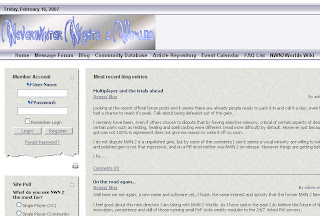 As he hinted before, Strauss has opened up a new website, this time called nwn2worlds.net. His focus will be on supporting the online and multiplayer communities. What exactly he'll be doing on that front is unclear to me, but I certainly wish him luck. I'm pretty much exclusively interested in single player modules, so I'm not sure how often I'll frequent that site. But I know there are many who are more interested in online activities, and I hope this site serves that part of the community well.

I will say it is a little strange to see him going by "Straus Maximus." I realize that his Bioware handle is (currently...it's changed a lot) Maximillian Strauss. But given Maximus's (meaning Maximus of the Vault) longtime standing in the community, it seems weird to go the route that Strauss has. But whatever.

I also noticed that slowdive_fan has started a blog that frequently covers his nwn2-related activities. For example, in addition to his ongoing progress reports related to his work as a NWN2 builder, he also has talked about other folks' modules, including this recent post which involved developing his own personal rating system. I spent a lot of time writing and thinking about rating systems last year and managed to involve myself with developing the new rating systems for both the public vault voting and the new nwn2 review guild scoring guidelines. It's amazing how many possible systems there are to evaluate modules...though in the end, I think most of them will come to the same end point. :)

It was interesting to see Prophecy of Aracas scoring so highly in his system--I'll have to play that module next. For now, though, it's time I go finish up Pool of Radiance. It offers a heck of a lot more gameplay than the 1 hour that was advertised. :)
Posted by Berliad at 11:34 PM