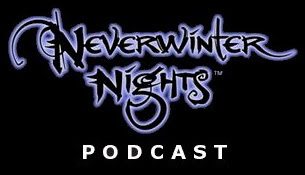 I thought I'd give a shout out about the NWN2 Podcast. I've been listening to it now and then as I work on the character creator and other projects the last few weeks, and I've found it to be really enjoyable little show. The two guys who run the show are extremely enthusiastic about the game and are trying to find out as much about it as they can. It's fun to hear from people who like the game as much as I do. ;)

The best feature about their podcasts are their full-length interviews. Here are the interviews I've heard on their show the last few weeks:
While I really enjoyed hearing from Nielson after following his writing the past couple of years, the Carlson interview in the most recent podcast is probably the most interesting for nwn2 fans, because she talked about her role at Obsidian and what they're up to. While the NDA prevented her from releasing much substantive information, she did confirm that they are working on additional content for NWN2 and that it's "super sweet."

I expect that this most likely means that they're working on an expansion pack, which would not be a surprise but is nonetheless great to hear. It will be interesting to see if they allow for epic levels in this expansion pack, or if they'll follow the pattern from nwn1 and hold off on epic levels until a second expansion pack. Give how popular epic levels were in nwn1, my guess is that they'll be here sooner rather than later...
Posted by Berliad at 12:10 AM