Yesterday, my wife and I made use of a fabulous 20% off coupon at Toys R Us (now expired or I'd link to it--sorry) to purchase our second Wii game, Super Paper Mario. My wife was a big fan of the original Super Mario Brothers on NES, while I'm a fan of rpg's--sounded like a good match. 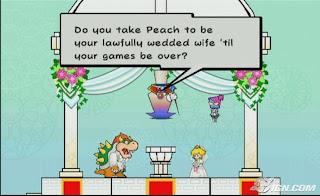 Unfortunately, the game fell flat on its face right from the get-go. The reason? It quite literally took 15 minutes to sit through the opening series of cutscenes. And then another 10 minutes to play through the first non-action area, and then sit through another cutscene, to finally hear the first "da-da-doo-da-da-dit---dah" that would signal the start of the actual game. And by this time, my wife had her head down on a couch cushion, undoubtedly wondering if we'd just wasted 40 bucks. :) It might have been different if the cutscenes were actually riveting. But the story of Super Paper Mario, like most Mario games, relies more on cuteness and humor than suspense. But even with with Resident Evil-level drama, a half hour is a long time to go before you get to do something interesting in a game.

So to all you would-be game designers out there, please learn from Mario's mistakes! Half-hour cutscenes and dialogs to start a module are a BAD IDEA! As demonstrated in Subtlety of Thay and countless of other NWN1/2 modules, the exposition and the majority of the plot development can come later. Get the player involved in the game--preferably doing something exciting--as quickly as you can. 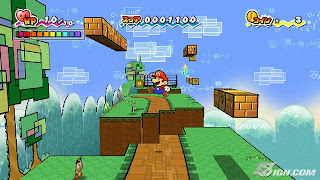 Fortunately, I can report that once we got past the initial slowness, Super Paper Mario is turning out to be a lot of fun. The concept of flipping between 2D and 3D "dimensions" for beings from side-scrolling universes is awesome, and flipping to the 3D realm and discovering hidden secrets is a real treat. And I love the use of HP (though I refuse to call them "heart points") in a platformer-style game. It might make it a little bit easy (so far), but for someone not blessed with particularly good platformer skills (in fact, my wife laughs at me whenever she watches me play...I can't jump from block to block to save my life), it's a lot more fun to get a second shot at jumping that chasm than having to start a level from scratch.

We have some relatives coming into town in a few weeks. I think we've decided to trudge through the cutscenes one last time and create a save just before the real action begins in case any guests want to play. Because it does seem to be a fun game. I just don't know what the designers were thinking when they put together the opening.
Posted by Berliad at 2:32 AM