The Eye of the Chained God by Don Bassingwaite 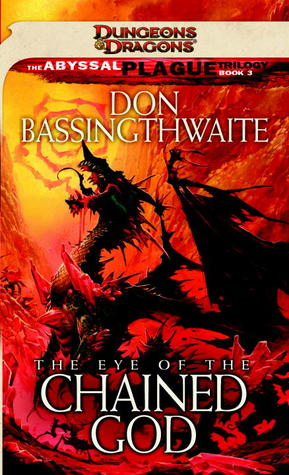 The Eye of the Chained God was an enjoyable read, and a satisfying conclusion to the Nentir Vale's trial with the abyssal plague. What began with a small core of characters in book one has broadened to a much larger party by book three. It is probably the case that the focus on some of the individual characters suffered as a result, but by the end of the book it is still the case that most of the major character arcs had reached at least a sort of conclusion.

The main character of the novel continues to be Albanon, the Wizard of Fallcrest, and much of the novel focuses on his continued struggles to retain his sanity following his encounter with the Chained God. I found this entire arc to be well-done. Kri, the fallen Cleric of Io, also returns, and plays a prominent role in the novel. Most of the rest of the returning characters have relatively smaller roles, but I still felt like each one (at least among those that survive!) developed.

The only arc that did not really ring true was that of Rhogar, the paladin of Bahamut. He is forced to go through a challenge to his faith, which began as a compelling narrative. In the end, however, while I don't want to get into spoilers, I found that conclusion of his tale was rather anticlimactic.

Overall, though, this was a fun trilogy to read. They stand on their own apart from the other abyssal plague stories, and are a great way to get to know the Fallcrest/Winterhaven areas of the Nentir Vale for those interested in such things.
Posted by Berliad at 12:50 PM