The Adversary by Erin Evans 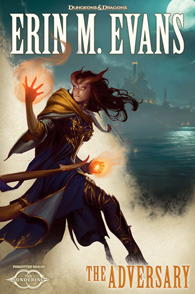 I heard the author of The Adversary, Erin Evans, describe the premise of her book as this: Farideh, the central character, makes a very bad decision early on in the book. She then spends the rest of the book dealing with the consequences of that decision.

It's a terrific, spoiler-free encapsulation of the story. What I didn't realize heading into this is that the consequences arrive on many fronts. Immediately, her decision has dramatic consequences on the people she holds most dear: her inner circle of family and friends. But the consequences of her choice extend much further. They interface with vast plots that entangle her personal story with events that threaten to affect the balance of power not only in the mortal realm, but the realm of the Gods as well.

I really enjoyed this novel. The core characters of the book were all distinct and multidimensional, and most undergo substantial character development. There is a lot of gray here: there are flawed heroes, and there are characters who would be villains in most stories, but here are forced to become allies of good. The plot had good pacing, always seems to move at a fast clip. Finally...there was a great deal of subtlety in the novel. While it was not blatantly (or manipulatively) deceptive, we often were presented with incomplete information. Only later did we learn complete story. More so than any of the other Sundering novels to this point, I think this is one that I'd gain the most by reading a second time.

One thing I really like about the author's style is how different her narrative feels depending on the point of view from which she is writing in a given chapter. Sometimes, for example, we're treated to an interaction between Farideh and Lorcan, her devil patron, presented from Farideh's point of view. Later, however, we get treated Lorcan's perspective as he thinks back to that event. Needless to say, their interpretations of the events are often radically different.

I don't have much to criticize. Like Godborn, I noticed a few small editing mistakes here and there. One time, for example, I think "Brin"'s name showed up as "Erin," which was amusing. But really, reading this was such a pleasure. I'm really looking forward to Erin Evan's next novel.

Edit: Turns out the Brin for Erin thing was the result of "kerning."  I am henceforth opposed to Kerns of any kind!


@Berliad I peeked. Brin/Erin error is kerning issue w/ the italics in the ebook! The text is correct, it just chops off the front of the B.
— Erin M. Evans (@erinmevans) February 9, 2014