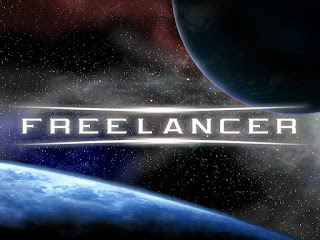 One of my first major game obsessions was Wing Commander.  From the moment that I read the review of the game in my glossy PC Gamer magazine, I knew I was going to love it.  It didn't disappoint.  I lived and died with the game, firing afterburners and pivoting past the disc-shaped Kilrathi fighters and locking in on their six**.  It was the reason I got my first sound card, and gave new life to my joystick, which had been untouched since my long foray with F-19 Stealth Fighter had come to an end.  Later incarnations of that franchise included Wing Commander Privateer, a game that took the formula of the game and placed it in a sandbox world, where you could explore a network of star systems as you saw fit.  The ships could be upgraded with a diversity of weapons, and you could choose a life of a merchant, pirate hunter...or a pirate.

**For the record, despite his character's appearance throughout the series, Maniac *always* died in his first mission in Wing Commander I. 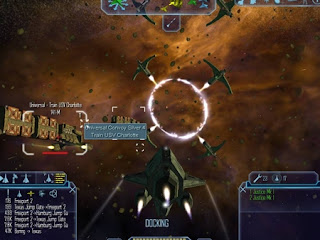 Freelancer, published by Microsoft in 2003, is a direct descendant of Privateer.  Designed by Chris Roberts, the same man behind the Wing Commander series, you take on the role of a freelancer pilot much like in Privateer.  As the game opens, your character is immediately swept up in a plot that threatens to destabilize the entire region, and potentially could threaten all human life in this part of the galaxy.  The game walks a balance between forcing you down a plotline (which is well-developed and fun, though basically on rails and can't hold a candle to the story of a game like Mass Effect) and freeing you to explore systems as you go.  As you advance through the plot, you frequently encounter roadblocks in which the story will not advance until you amass more experience (which is simply measured via your net worth).  The solution?  Take bounty hunter missions, transport cargo, and explore. 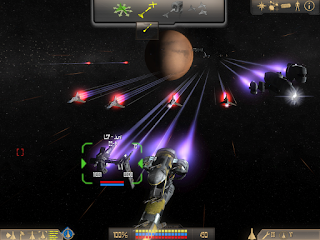 The game's galaxy is enormous.  During a good chunk of the plot, you only have access to a few systems at a time, each of which might contain a couple of planets, along with 4-5 other space stations, battleships, etc.  In most cases, you can dock with these installations, trade goods, repair your ship, get new missions, and then set off for your next destination.  Nevertheless, this rarely gets old, because the game's plot moves you from system to system.  I usually found that by the time I'd finished exploring a particular region, the plot was ready for me once again.  Upon completing the main plot, the entire galaxy is open to you.  There must be at least 50 systems in this world, and while I spent a good week exploring after finishing the story, I know there was much more to see.  Furthermore, I'm still only part of the way through the ship advancements.  There are at least three more classes of starships that I can purchase (not to mention weapon and shield upgrades), if I can amass enough credits and find the rare station that sells those elite items.  This RPG-style progression provides a tangible sense of advancement in the game; when you upgrade to a new ship, the impacts on your effectiveness are palpable. 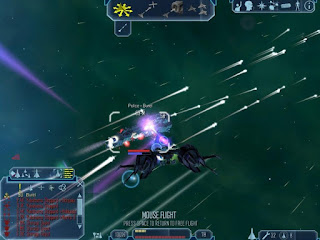 The core of the game is its space combat simulator.  I found it to be a very natural game to control.  Unlike other games that relied on a joystick, Freelancer is mouse driven, and it works great.  There are two modes of flight control.  You can play in an "autopilot" mode, where you select a destination in your nav computer, and your ship will pilot you there by the most efficient combination of jump gates and travel through open space.  While in this mode, your main guns will pivot about to fire upon anything in front of your craft (tracking your cursor), or you can jump back to your turret and defend your rear.  Alternatively, you can take total full control of your ship (the ship will follow your cursor).  I generally found that, whenever enemy ships were about, it was important to avoid a straight flight path, and so it was far more important to control the ship than to control weapons separate from flight.  Dogfights in this game are often frantic affairs, requiring on to constantly be turning, firing afterburners, ejecting countermeasures and seeker mines, and managing your weapons' energy consumption as you fight. 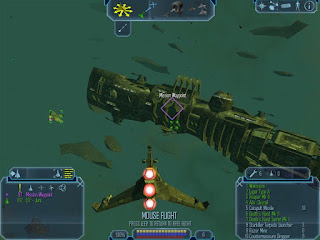 Beyond the game's success in modeling space combat, it almost succeeds in creating fantastic atmosphere.  The graphics, particularly while in space, are superb, even compared to today's hardware.  Furthermore, they did a great job with sound.  As you cruise about space near a battleship or science station, you'll hear constant communication traffic as freighters request passage through the current system, or law enforcement patrols scan cargo holds for contraband.  It's a lawless universe, with frequent pirate raids even within protected space.  It is not uncommon to launch from a battleship to see the local fighters skirmishing with a band of ruffian fighters.  Often times, neither side is looking to engage you, which lets you head to the nearest jump point while the two sides pummel one another...or you join into the fray. 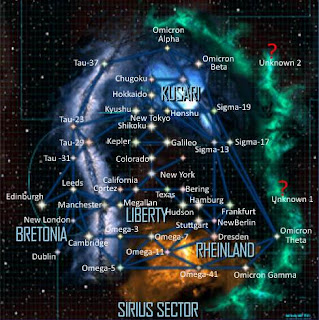 There are critiques that one can levy at the game.  The voice acting ranges from decent to awful.  The plot is generally done well, but some of the unnecessary side conversations that you can have with random NPC's in bars are abysmally awful.  They would have been better left as text only conversations, if they were included at all.  The space environment, for all its triumph, is essentially laid out on a 2D plane, which simplifies the space map but is a little jarring.  Combat difficulty can be uneven; randomly spawned pirates, especially off of trade routes, can be insanely hard compared to the "galactic threats" you encounter in the game.

Nevertheless, this game's successes easily exceed its failures.  While finding a copy can be hard (I still somehow have my DVD copy from ages past), the game holds up extremely well today and may still be the best game of its kind published since 2003.  Until something else surpasses it, this game will have a permanent place on my hard drive.  It is beautifully consumed in anything from 30-minute or 2-3 hour play sessions.  4.5 out of 5 stars.
Posted by Berliad at 10:32 PM