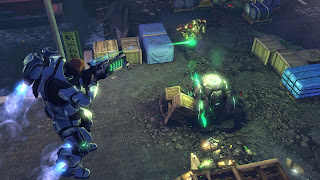 The call goes out in the middle of the night: far away, on the other side of the world, strange sightings have been made.  Reports of destruction.  Previous squads sent to investigate are missing.  It's time to send in your team.  X-Com: Enemy Unknown is a sci-fi, squad-based combat strategy game in which you take command of an elite group tasked with stopping an alien invasion.  With funding from countries around the world and the ability to deploy within hours to any major city in the world, you are perhaps the world's best hope to oppose a covert invasion of aliens.  It's a fantastic game that mingles a terrific turn-based combat engine with a low-key resource management and technology tree game to create a really compelling experience. 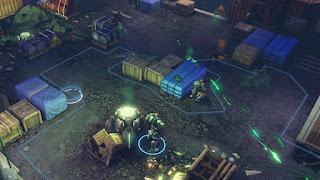 The turn-based combat is highly tactical.  You have four major classes of units at your disposal.  Assault units are your close-combat fighters, capable of running into the midst of heavily armed opponents, surviving their reaction fire, and blasting them with shotguns or (my preference) assault rifles.  Heavy units carry heavy weapons, and (as they advance) are capable of firing multiple times per round and wielding ammo that can take down robotic units, some of the toughest enemies in the game.  Support troops are mobility specialists, effective in combat while also providing medical and cover support for their squadmates.  Finally, snipers are your long-distance specialists, capable of holding back at one side of the map while picking off any enemy in visual range of their squadmates, provided they have line of sight.  Each unit has a number of choices that can be made as they level up, so its possible to have each unit specialize a bit as they develop, although I usually found that some choices were clearly better than others.  Still, your success in the missions will depend on your ability to get the right troops into position, take advantage of their talents, and protect them from the enemy's deadly counterattacks.

This is a challenging game.  Cover, positioning, and use of all your soldiers' skills are necessary for survival.  Make the wrong move and you can easily be swarmed by several enemies at a time, and they are flat-out deadly.  If an enemy moves up your flank, or even gets a lucky shot on your character when s/he is behind cover, you can easily lose a character with a single shot.  Advancement along the promotion and technology trees can make a big difference in your troops' survivability, but as you advance you will increasingly encounter tougher and tougher units.  As a result, despite significant gains in my troops' capacity, combat missions almost always were played out with a palpable sense of fear.  Just as you start to feel comfortable, the game has a tendency to throw a new threat at you, and you are suddenly left wondering how you can possibly survive.  Fortunately, at least on normal difficulty, you can save in the middle of missions, and the game even autosaves every few rounds for you.  There's no shame in reloading when you're favorite unit gets greased.  It really is manageable.

The game has terrific atmosphere.  Aliens are appropriately mysterious and, well, alien.  The graphics are excellent, with wonderful flourishes of animation on key shots or maneuver that keep your adrenaline flowing and keep it feeling fast-paced, despite the fact that it's turn-based.  Sound is really well-done as well; playing with equipment provides satisfying feedback, and ambient noise and music keep the mood going as you battle your way through urban or rural settings.  Missions vary from pure-kill missions to rescues.  Some of the most intense are those where you are sent into an urban setting and are tasked with saving as many civilians as you can from the enemy threat.  Aliens in these missions regularly will attack civilians just out of your reach, prompting you to advance across the map at a rate faster than is comfortable.

The game is designed to be replayed.  A complete play-through takes something on the order of 30-40 hours, I think, and is long enough to be a satisfying experience.  That's all I've done thus far, but there are options to play again in the Second Wave, which allows you to customize the settings of the game to provide more of a challenge: weapons can cause a wider range of damage, units can be created or advance with different statistics (they are normally very consistent), etc.  Despite still having several other games calling for my attention, I'm feeling compelled to continue on with this game.  It's addictive, maddening, and crazy-fun.  An easy 5 out of 5.
Posted by Berliad at 3:59 PM