I'm back in town, but a conference that starts in a few hours and lasts through Sunday has me busier than heck. In addition to preparing for my talk tomorrow, I'm trying to catch up on 10 days of neglect of my poor research critters (fruit flies). So I haven't had much chance to play NWN2 stuff yet.

Not a huge deal, as quick perusal of the recent module uploads/updates indicates that there wasn't much that was released in the time that I was gone. Mystery at Willowbow is receiving some pretty favorable comments--hopefully I'll get a chance to play it sometime this week. Aside from that, most of what is out is either a trainer/arena module or an alpha/beta release, which I typically steer clear of.

One really encouraging thing that I am seeing are the tremendous number of module-in-progress announcements over on the NWN2 modules forum. Despite the various issues that have been present with the toolset and the game, the builder community is really ramping up. And a lot of the ideas sounds really intriguing. 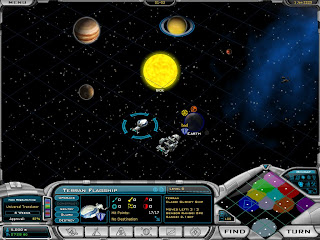 While we wait for the big releases, I did receive a new game for X-mas: Galactic Civilizations II. I've long been a fan (albeit an intermittent player) of Masters of Orion-type space strategy games, and this seems to be the best in the genre right now. I've put a few hours into it and I'm having a good time. The AI seems pretty smart, even on "normal" difficulty level, which is nice. The last of these games that I really got into was Pax Imperia: Eminent Domain, but in that game the AI pretty much just researched whatever was cheapest and built the same sorts of ships within each class. It also was plagued by the existence of a type of uber-powerful weapons that pretty much were the only way to win once research progressed that far. There seems to be a lot more strategy in this new game (multiple ways to "win," multiple sorts of weapons with parity, etc), so I'm looking forward to playing it a bit on the side.

Credit for the pic goes to the galactic civ website--if I keep playing, I might post a few of my own here as well. :)
Posted by Berliad at 6:15 PM