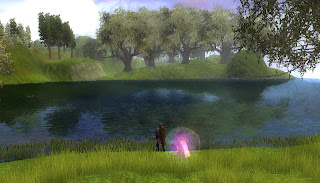 I just finished one of the most thrilling battles I've experienced in an rpg in a long time. It kills me not to talk about it in detail, but I don't want to spoil it for anyone who hasn't already played Tragedy in Tragidor.

Suffice it to say that my lv. 6 sorcerer expired her spells about a third of the way through it, even though she'd already killed massive numbers of enemies with fireballs and burning hands, and had disabled at least the same number with clouds of bewilderment. She had to make a frantic retreat down a hallway and rely on a dinky wand of missiles and, yes, her freaking longsword (she's an elf) to take down those who pursued her. She got lucky and survived with 2 hp remaining, ghostly visage expiring two round sprior to the end of the sword fight with her last foe. Meanwhile, her barbarian and rogue companions waged a desperate fight against the remaining hordes, eventually reigning triumphant thanks in large part to the barbarian's great cleave.

I'm actually mentally exhausted and yet exhilarated at the same time. For what ultimately is not (apparently) a major plot-related battle in this module, that's quite an accomplishment on the part of the author, Phoenixus. 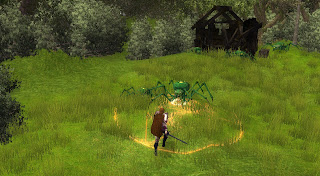 The other thing that was really exciting about this module was how the outdoor areas were used. While the OC had nice outdoor areas, there were always clear lines of sight in every direction, so you were rarely surprised. Phoenixus's module contains outdoor areas that are genuinely lands that must be explored. Trees and brush are abundant so you can't see far at all. There are also no map pins for the areas of interest, of which there are a good number. I found the new Survival skill in NWN2 to be all but useless in the OC because things were so predictable. In Tragidor, however, I'm finding myself relying on it while walking through the wilderness.

How anyone can still say that there's no future in NWN2 modding when something like Tragidor is out and available for play is beyond me. No, it's not perfect, but thus far it has shown itself to be a solid, engaging adventure that is genuinely innovative in what it offers the player. The proof is right here folks, NWN2 is the new platform of choice. I've never been as excited about the potential that NWN2 has as a modding platform as I am right now.
Posted by Berliad at 1:02 AM