Eulogy: a gamer and his keyboard 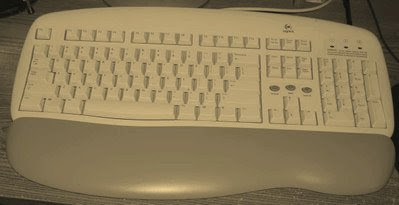 One minute I was sitting down to write the last bit of dialog for my character creator... The next minute, spaces were being added at random, characters were mapping onto the wrong keys, and my computer tower was screaming at me with a torrent of beeps. I blew it out with an air can, turned off everything, tried again. No avail. I let it sit unplugged until the morning and tried again, but there was no hope. My keyboard was dead.

This keyboard and I, we had a good time together. We came to be together shortly after my arrival here in Arizona, my previous keyboard having been the terrible victim of some poor packing decisions (truth be told, she was already on her way out before we took that cross-country drive...). Thinking back on it, I remember how excited I was to have a keyboard with securely-connected backspace key once again.

And what fun we had. Together, we fulfilled our promise as the spawn of Bhaal. We defeated Diablo and his brothers. We explored an alien world in Anarchy. We set out to conquer the galaxy and wrest it from the clutches of the evil empire. We were an evil genius, bent on global domination. We rescued Neverwinter from an elven maiden driven mad by love, learned the secrets of Undrentide, explored the Underdark, and ultimately even conqured death. And, of course, we saved the universe countless times over again thanks to the Neverwinter Nights community.

But today, I have a new partner. We're still in that "getting to know you" phase, so things are still a bit awkward. But, with time, I think we'll be able to do great things. Wish us luck. :)
Posted by Berliad at 1:42 AM