More on the Red Wizard 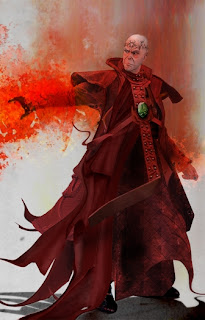 One of the highest-profile additions that will be coming with the expansion class is the new Red Wizard of Thay prestige class. In the NWN2 blog yesterday, Rob McGinnis gave the lowdown on how they will be implementing it:

Requirements: The Red Wizard prestige class requires that you be human and have any non-good alignment. You must have 8 ranks in the Spellcraft skill and at least one metamagic feat or item creation feat (other than scribe scroll). Other feats you must have are Spell Penetration and Greater Spell Penetration, too. On top of all that you must be a specialist wizard with the ability to cast at least 3rd level arcane spells.

Class Features: The Red Wizard uses the d4 Hit Die, just like a normal wizard and has a low base attack bonus (BAB). Her high save is Will. Red Wizards gain no armor or weapon proficiencies and gain 2 skill points, plus intelligence modifier, per level in skill points.

The special features a Red Wizard gains are as follows (not listed in any particular order):

1. Red Wizards continue to gain spells per level as though gaining a level in Wizard.
2. Enhanced Specialization: Upon becoming a Red Wizard, the character becomes even more skilled at casting spells from his chosen school of specialization.
3. Specialist Defense: A Red Wizard gains a bonus to defending against schools from his specialist school.
4. Spell Power: The Red Wizard's effective caster level for determining level-dependent variable checks is increased by +1.
5. Wizard Bonus Feat: Red Wizards gain a bonus metamagic or item creation feat.

Overall, it looks like a nice option for neutral and evil specialist wizards looking for something a bit different. Unlike the Pale Master, I don't think there's any sort of delay in caster level, so this seems like a nice alternative. The enhanced specialization might be really powerful for an illusionist or an enchanter, and the spell power boost is handy. That said, I don't think it's going to result in the feeling that you're significantly different from a normal wizard--but at least you get to be a Red Wizard!

The graphic, by the way, is an excellent collage/paint job by relsh (note, this is not a contest submission).

Life's been pretty busy, and my university was in the College World Series recently, which means I haven't played NWN2 in about 5 days. I'm nearing the end of Subtlety of Thay, and hope to finish it up tonight. Fun mod. Comments on that to follow.
Posted by Berliad at 1:09 AM