You get the original NWN2, plus Mask of the Betrayer and Storm of Zehir.  You do not get Mysteries of Westgate, which is a shame.  But that's another $9.99 at the Atari store.
Posted by Berliad at 9:05 PM No comments:

Email ThisBlogThis!Share to TwitterShare to FacebookShare to Pinterest
Labels: nwn2

I've been playing NWN1 on my laptop, which works ok except that it invariably freezes after about 45 minutes of play.  I'm not sure why.  Might be  heat thing.  Or it might be Windows XP emulation thing. 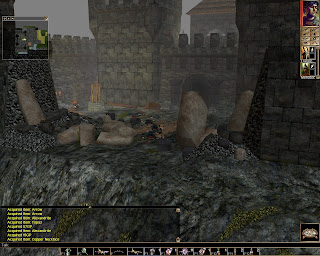 So, I finally figured out how to get my old gaming rig (purchased to run NWN2) running in the family room.  It's  surprisingly accessible and non-disruptive to family life, though the fan is still loud as all hell.  It's running NWN1 flawlessly, with sound via some wireless headphones I bought a while back.  It's really great--I forgot how much difference a full-sized monitor makes.

Now if only I could find my nwn2 disks....but they seem to have gone AWOL.  I have no idea where they might be.  Would be fun to fire it up and see what people in the modding community did with it.
Posted by Berliad at 5:55 PM No comments:

Email ThisBlogThis!Share to TwitterShare to FacebookShare to Pinterest
Labels: nwn1

Scanning Tokens for use in MapTool

The first adventure my group is likely to have upon arriving in Fallcrest is an encounter with the River Rats of the Lower Quays.  I have this all designed in Masterplan, but I'm building it in MapTool so I can run it with my group online.

Tonight's job: Scan in my Threats to the Nentir Vale tokens.  This was a pretty quick job.  I scanned at 300 dpi, and then applied a blur filter in Gimp to get rid of the pixelation that seems to come with scans of printed materials like this.

The result is very nice (the blur just undoes some needless sharpening that the scanner seems to add), and very easy to copy over into TokenTool!  Now that I have it ready, I can create tokens in MapTool quickly for anything in this second Monster Vault.  The result, when coupled with an export from Masterplan's fabulous tile-based map editor, is an awfully darn good looking encounter (right).

I need to playtest a few possible ways to model the Market Green Grifter's "play dead" power.  I could actually kill her in MapTool, but at this point I'm leaning toward just making her go unconscious for a round so that I don't break anything.  That way, MapTool should properly handle area spell damage and such that might affect her...  and heroes can still attack her if they can beat the insight check.  We'll see what I come up with.

As a side note, I absolutely adore Monster Vault: Threats to Nentir Vale.  Monster Vault was fine, but the availability of a specific setting allows this one to be far more specific and far more interesting.  The monsters are varied and each has interesting aspects to it: both stat blocks and story.  The villains are terrific.  And best of all, for those not playing in Nentir Vale, it's all pretty easy to plop the content down in anyone's home campaign setting.  Highly recommended!
Posted by Berliad at 11:42 PM No comments:

DnD with kids: use of maptool

I haven't been very active of late.  There are a few reasons for this.  First, over Thanksgiving, I played a lot of DnD with "my group," which includes my daughter, sister-in-law, and her two children.  We had a great time, but learned a few things in the process:

1. It's virtually impossible to play more than one encounter at a time with 5- and 6-year olds.  And even then, if the encounter goes over 45 minutes, they're pretty much hopeless.

2. The math isn't a horrible barrier for 5- and 6-year olds.  But with the focus on die rolling and math, the roleplaying immersion is easily lost, because it takes everything they have to make it work.  This goes for me too--since I'm keeping track of the girls' HP in addition to the monsters, I'm involved in every move, and it's easy to forget to do things like roleplay the villain and have him taunt the players.

3. A level 5 encounter is waay too much for my party of level 1 players.  If you've played Twisted Halls, you know the final encounter: three level 3 soldier skeletons, 1 hulking zombie, and 1 necromancer.  The necromancer doesn't even get involved until one of the undead perish.  Even so, the party was pretty overmatched, with our slayer going down in the second round, and damage dealing far outstripping the healing abilities of the party.  And that's even with Smite Undead dispatching the zombie down the hallway for several rounds (pushed 6, can only move 4 squares).

I ended up having to fudge rolls like crazy to keep the party afloat.  Even so, everyone was bloodied by the end, and everyone had spent ther healing spells and second wind.

4. Not playing often makes me feel frantic to play whenever we do have a chance to play.  We ended up playing several times per day for three days in a row, which I think we starting to get old for everyone at the end of the day.

I don't have a solution for #3, aside from more slowing increasing the difficulty level than I had been doing.  But I may have a tentative solution to #1 and #2: Maptool.

Maptool is a package that allows you to conduct DnD games (or most other games) online.  This is why I looked at it in the first place, as half of the group lives two hours away and we only get together every few months.

Thanks to the impressive work of other Maptool users and developers, however, there are frameworks available for download that allow for varied levels of integration of 4e rules directly into the software.  Some essentially are designed to just help you keep track of each PC and NPC's stats, and leave it to the DM to impose damage, conditions, etc, as appropriate.  Others are more in depth and allow you to automate many aspects of DnD combat.

The one I've been setting up is Rumble's 4e Framework, version 5.  While its character management isn't as nice as some other frameworks, (it only tracks weapons and implements, doesn't calculate AC or defenses, etc), it is pretty easy to use this framework to automate most aspects of combat:  attack/damage rolls, damage dealt, resistances, condition imposition and expiration, etc.  In fact, the only thing it doesn't do automatically are a) forced movement (the DM still has to move the monster), b) delayed condition changes, like sleep spells causing unconsciousness on the first failed saving throw, and c) prompting a player to make a saving throw off of its turn in response to a cleric power (though you can include text reminders to prompt a DM to do each of those events).  Everything else, for the most part, is done pretty easily with zero knowledge of scripting.

It does take some time to learn how the framework operates, and to get the characters and monsters into the software.  But when you do, the result is something that almost resembles a video game!  I think this will work very well for my group.  Going back to the problems above:

1) This should speed up combat dramatically.  What was once a minute long sequence of rolling, adding bonuses (kids take a while to do this), announcing the attack number, rolling damage, adding again, announcing the damage number is now three clicks: once to select your attack power, once to target, once to hit "ok" (assuming no modifiers are needed like CA, but even that's just another click away).  The faster the combat, the more focused everyone will be at the "table."

2) Less math.  There still will be some, and I'd like them to be aware of it.  They'll see the numbers, and we'll talk about damage modifiers now and then.  But at the same time, they'll have more fun if they can focus on the roleplaying, rather than just adding attack modifiers to dice rolls.  It also frees me up a lot.  I won't have to try to remember every status effect (even with colored hair band markers, that's hard to do) and everything else going on, which will make it easier for me to roleplay as well.

3) While this doesn't directly solve the problem of encounter difficulty catching me off guard, it will allow me to playtest challenging encounters on my own really easily.  I want to do the occasional level+3 encounter, but I want it to be possible!  With Rumble's framework all set up, DnD plays like a video game!

That said, I will have a hard time fudging attack/damage rolls using the software, so I'll have to have a back-up intervention scenario should I achieve a TPK...

4) We get to play outside of family gatherings.  By playing online, we can be less frantic about getting our gaming in when everyone gets together.  This should make family events less about DnD than this past Thanksgiving was.  I know I'll like that, because it'll let me care a lot less about whether we get to play when people get together.

Anyway, I'll have more on MapTool (and Masterplan, which I'm also using and loving) in the future.  But if you haven't checked it out, you should really do so.  I'm looking forward to giving it a whirl with actual players....once I get my monsters and maps all set up for our adventure! :)
Posted by Berliad at 10:00 PM No comments: