The Reaver by Richard Lee Byers 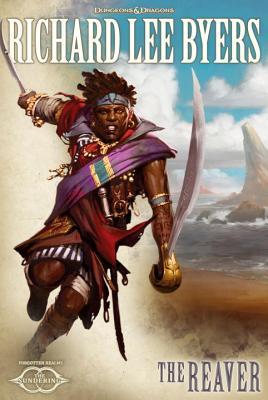 The Reaver manages to combine almost non-stop action with interesting character development.  The story revolves around the journey of Stedd, young boy who is the chosen of reincarnated Lathander who made a minor appearance in Erin Evans' book, The Adversary.  Stedd is on a mission to Sapra, but is opposed by Evendur Highcastle, a grotesque, undead pirate raised by Umberlee as her Chosen.  As the book begins, Highcastle has put out a bounty on Stedd, which all manner of scum seek to receive...including the main character of the book, a dastardly pirate named Anton Marivaldi.  What follows is an interesting character journey in which Anton almost accidentally finds himself wrapped up in conflict surrounding the boy, Stedd, and ultimately undergoes a gradual, believable transformation.

The characters are really central to this story.  Anton is a fascinating character, a man who committed himself to impulse and greed who is suddenly faced with what to do with a boy of virtually pure goodness.  There is also Umara, a brilliant Red Wizard of Thay, and cunning illusionist, and servant to a powerful vampire lord, Kymas.  And finally, there is Evendur Highcastle, a bloated, rotting corpse reanimated to channel the power and machinations of Umberlee.  It's a great cast, and I'm hopeful that we might someday see a sequel or spinoff to see what happens to some of the survivors.

This book is the 4th in the Sundering series.  One can argue that it is the most "Sundering-y" of the bunch thus far. Whereas others hint at the machinations of the gods above, and we see Chosen struggling against one another to further their own goals and those of their dieties, The Reaver features battles among chosen on a grand scale.  The entire book is set during the time of "The Great Rain," a period of endless rain that pounds the Sea of Fallen Stars and the nations that border it.  The rain permeates everything in the novel, and its origin and meaning--natural, or divine--is one of its great mysteries.  Furthermore, more overt divine magic permeates the book, and we are treated to epic sea battles as the forces of Umberlee clash with those of Lathander, Silvanus, and the wizards of Thay.  And on top of all of that, there's everything one could hope for in a tale of buccaneers: infiltration, swashbuckling, sabotage, and ship-to-ship combat, all with a sprinkling of fantasy magic.

I had some minor criticisms.  The last third of the book seemed, at times, a bit less polished than the first two thirds.  But the book features so many points of high drama and excitement that I have no hesitation in giving it a strong review.  It's a great read, and one of my favorite Forgotten Realms novels.
Posted by Berliad at 10:39 PM No comments: