Rise of the King by R.A. Salvatore 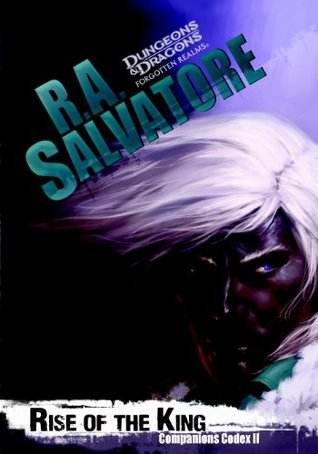 Having tied up some loose ends in Night of the Hunter, Drizzt and his companions begin their trek toward Mithral Hall.  There, Bruenor hopes to reclaim his throne and rectify what he views as his error in permitting the orc king of Many Arrows to establish a peaceful kingdom that borders the Silver Marches.  Little do they realize that the Drow are already moving, and war is coming to Luruar.  Orcs, giants dwarves, elves, men, and even dragons clash in this book of conflict and struggle.

This is among the most enjoyable Salvatore books that I've read, and in my view is definitely the best of the Sundering era.  The action is fast, furious, and epic.  While other books have featured exciting, small squad skirmishes, this one gives us those as well as epic battles for the fates of cities.  On top of the battles, we are treated to reconnaissance, espionage, and another hearty helping of political machinations among the Drow.

Regis, who in many ways was the star of The Companions, took something of a back seat in Night of the Hunter.  In this book, however, he was back to playing a central role, and in my view has easily become the most dynamic and interesting character in the crew.  Furthermore, while Jarlaxle spent Night of the Hunter reacting, in this book he seems to be back on the offensive.  As we might expect, of course, exactly what he's after still has yet to become clear.  Beyond those two, I'm not sure that we see a lot of significant character development, aside from some continued discussions between Drizzt and Catti-brie on the inherent nature of orcs and goblins.

I really enjoyed the book, and will, of course, look forward to reading the next in the series when it is published in 2015.
Posted by Berliad at 4:07 PM No comments:

So, I happened across Tides of Numenera recently.  Today I noticed that they had a first-peak of the gameplay.  It looks awfully promising.  Definitely one that I'll keep my eye on!


I'm familiar with Numenera from afar, having seen references to Monty Cook's new game that he made after bowing out of 5th edition D&D.  I've always enjoyed some of the final fantasy games as a blend of fantasy and science fiction, and this looks to do that as well.  I'm looking forward to the game.  It's been a while since I've followed a PC game before it came out.  I think the last one was...probably Neverwinter Nights 2. :)

In NWN news, I'm playing Saleron's Gambit 5 right now, and am nearing the end.  It ultimately isn't quite on the level of Maimed God's Saga, but it's really fun.  I can't wait to see what happens in this plot that has been building for five modules now! :)
Posted by Berliad at 5:10 PM No comments:

Email ThisBlogThis!Share to TwitterShare to FacebookShare to Pinterest
Labels: Torment

Sanctum of the Archmage - The Sight

While exploring some abandoned ruins near your home, you suddenly experience a powerful sense of dread.  You've long had a sense of premonition...dreams of what might come.  And strangely, more often than not, they seem to come true.  And now, that sense telling you that something terrible is about to happen at your home where your parents currently dwell.

So begins the Sanctum of the Archmage - The Sight.  Andarian's modules came along after I more or less bowed out of the NWN1 community to focus on NWN2, and his modules were consistently ranked at the top of the NWVault's charts.  I finally had a chance to play this one, and I am ever so glad that I did.  Here are my comments to the author.

I absolutely loved your module.  There are very few mods that do such a good job of combining superb roleplaying opportunities, deep and relatable companions, puzzles, and combat as well as this one.  The inclusion of science fiction elements was really unexpected, and yet fit beautifully with the setting and story.  I really enjoyed getting to know each of the principle NPC's, as each had some surprising depth to them.  I also loved how you used objects, books, etc, to tell the story, and not just dialog.

Combat seemed about right for my wizard/rogue, though some of the battles skewed to the difficult side of things.  Starting him as a rogue fit perfectly with the story, and I alternated between wizard and rogue levels from that point on.  I had to reload a number of times during a few key setpiece battles.

Nevertheless, I think the only time I had to go to the spoilers document was versus a certain giant monster, and that was mostly just to verify that I was, in fact, supposed to be able to kill it.  Several of the puzzles also required some help from the spoiler document in my case, but it was so well organized that I could often solve the problem from the preliminary "hint" section before being completely spoiled.  Some of the ones that I did solve on my own, such as what to do with the owlbear eggs, were extremely gratifying.

There's a lot of custom content here, including custom scripted items, crafting systems, and the death system.  I liked all of it a lot.  I did run into one issue where I think the death system didn't always interact well with characters that had a regeneration item.  I'd given Orion one such item, and I think he might have resurrected with the regen before I used the bandage on him.  The result was a standing Orion that could move around, but wouldn't respond to requests to talk to him.  I reloaded from a saved game and repeated the battle to make sure he was ok.

Nevertheless, the module seemed extremely well polished, with great writing, action, and adventure throughout.  I do hope that you are able to release the second chapter again this fall.  I did also download your book on amazon when you had a sale, and I'm looking forward to reading it as soon as I finish the book I'm currently reading.

As a small note to potential players: there is a long, daunting list of custom content that you will need for this module. Andarian provides clear instructions on what you need (and don't need), however. Just bite the bullet and download it all. It's worth it!
Posted by Berliad at 4:23 PM No comments: