Review: The Martian by Andy Wier

In the not-so-distant future, Mark Watney was one of a crew of six astronauts to land on Mars in the Ares 3 mission.  But just as their mission began, tragedy struck: a dangerous storm came upon their landing site and caused the team to abort their mission and flee the planet.  While the crew evacuated to the launch vehicle, Mark was struck by debris, launching him far from his companions, knocking him unconscious, destroying his biomonitor.  After a desperate, fruitless search, his crew was forced to presume him dead and leave the planet without him.  Despite all odds, however, Watney survived and made it back to the Hab.  The only problem was that he was stranded on a desolate, inhospitable planet with a finite supply of food and no way of communicating with with Earth.

So begins The Martian, a fantastic survival story by Andy Weir.  Much of the story is told through first-person logs that Mark uses to document his step-wise puzzle through each problem.  The tremendous appeal of this book, beyond the thrilling survival story, is that Mark makes use of a lot of real-life science in this tale.  His food problem comes down to a strict issue of calories: he has vitamins and protein tablets, but how can he produce the precise number of calories he needs in time to be rescued 4 years later during the next Ares mission?  Traveling to the next Ares site becomes a problem of power: how can he maintain his life support system and still have enough energy to power the rover using his solar cells?  If that doesn't sound like gripping reading, perhaps that's the genius of this book: despite its sometimes technical nature, its pacing, humor, surprises, and quality writing make it a gripping tale that kept me up many nights far past a reasonable bedtime.

Like many people picking up the book now, I read this after having watched the superb movie last year.  The movie is extremely true to the book in many parts, even down to extended stretches of the dialog.  But in other places, the movie deviates substantially from the book.  While I was initially concerned that reading it would be too much of a rehash of the movie, it quickly became clear that there was a lot more in this book to sink my teeth into.  And even those parts that do match up to the movie are just so thrilling that they still will keep you up late reading.

The movie was the best film I'd seen in years.  This book is right up there with it.  Highly recommended.
Posted by Berliad at 8:03 PM No comments: 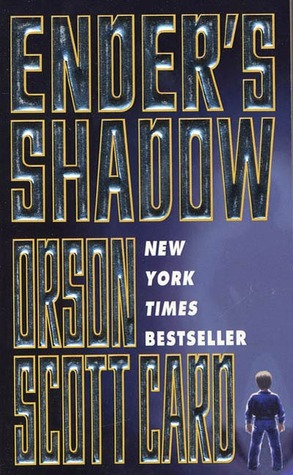 Ender's Game was a book about Ender Wiggins, a genius among geniuses, and the boy who, almost unwittingly, became humanity's great hope in their battle against a powerful alien race.  Ender's Shadow is the story of Bean, who probably had a more remarkable mind than even Ender, but was just a few years behind him and played a less well-recognized role in the fateful events of that story.

This is most definitely Bean's book.  While his tale certainly overlaps with Ender's, and there are common characters, this isn't really just a retelling of the original novel.  A great deal of this book happens away from Ender, beginning with Bean's early childhood on the streets of Rotterdam, or in different parts of Battle School.  By being told from Bean's perspective, even the climax of this book, which directly overlaps with the conclusion of Ender's Game, feels different.  We learn a great deal more about what was going on during those events, much of which happened outside of Ender's frame of reference.  Bean is a fantastic character with a great deal of depth, and it was fun to live in his mind.

The book was a very fast read.  While other novels might take me over a month to pick through, I read this one cover-to-cover in about two weeks (I'm not a fast reader and have a busy life, so this is about as fast as it gets).  It's lively and fun, and I enjoyed it immensely.  If I have a criticism of the story, it's that huge chunks of the novel are long descriptions of what was going on in Bean's mind.  These introspections are often interesting and certainly drive the narrative forward, but I think they were a bit overdone in the book and certainly ventured into the realm of "telling, not showing."  Granted, it'd be difficult to tell the same story without them, because Bean as a character is incredibly secretive, introspective, and, for much of the book, very introverted.

This is apparently the first book in a series of six(!) books focused on Bean and his family, not all of which have been released.  I'm not sure if/when I'll dig into that series, but I certainly would recommend this book to anyone who enjoyed the original and wanted another chance to explore Orson Scott Card's Battle School.
Posted by Berliad at 10:24 PM No comments: