The Sentinel by Troy Denning 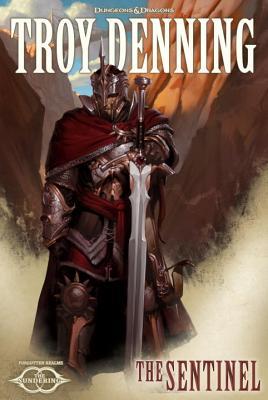 In the midst of the invasion of Cormyr by Sembia and the Netherese, Kleef Kenric, a guardsman of intermediate rank in Marsember, finds himself caught in the middle of a conflict involving the gods themselves.  He encounters Arietta Seasilver, a young noble, as well as a pair of surreal characters with mysterious motives: Joelle Emmeline, a chosen of Sune, and Malik, and chosen of Myrkul.  Together, they take part in a grand adventure, ranging across much of Faerun in their efforts to save Toril.

The book begins extremely well.  We are treated to thrilling action at a breakneck pace that feels invigorating and fresh.  We haven't had the opportunity to experience life in a large city thus far in the Sundering series, and this book begins squarely in Marsember during a time of crisis.  The characters present themselves as capable, but still vulnerable, with plenty of room for development.  Furthermore, the plot is full of potential and mystery.  There are great concepts as well, like the idea that one interprets the actions of the gods based on one's own internal belief system.  It's great.

Unfortunately, at least in my view, as the book passed the half-way mark, it seemed to stumble.  The characters, which began so well, became more shallow and less dynamic.  Interesting characters entered and then left abruptly, often without much in the way of resolution.  The plot continued at a break-neck pace, and somehow that became a problem as we went.  The danger level never really declined, but the heroes seemed to have less and less trouble with their challenges as they went.  Sometimes, their actions seemed at odds with the apparent gravity of the situation they faced.  In short, it just didn't work.

I'm not sure what happened here.  Maybe the book was rushed.  Or maybe there was just too much story here to tell in the space that Denning was allotted, and they didn't cull it down sufficiently.  It's a shame, because the book began so well and had so much potential.  In light of how good the first half was, I'm giving it a 3.