Review: Ashes of the Tyrant by Erin Evans 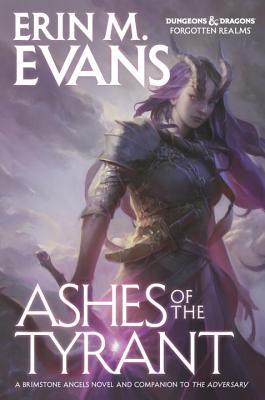 Having aided Raedra and saved Suzail from conquest, Farideh and her family venture to a land that weighs heavily on her and Havilar's upbringing, despite them never setting foot there: Djerad Thymar, the center of dragonborn culture in Faerun.  While the tale begins as a simple answer to a summons, the family quickly becomes swept up in the mysterious murder of a dozen young dragonborn.  All the while, Dahl is on the other side of the world, coming to grips with the fact that he might never be able to see Farideh again--the price of saving his family.

I'm of two minds on this book.  On one hand, this book does more to establish the culture of Faerunian dragonborn than any other work yet published by Wizards of the Coast.  Evans' dragonborn society is rich in tradition, history, and culture, and this book really dives into it.  You learn about the high politics of how leaders are chosen in their militaristic society, and how that tightly interfaces with how the daily lives of individuals play out within their complicated family structures.  It's a society that feels fresh and unique, distinct from anything I've seen before in the Realms (and probably elsewhere).  It's tight and detailed, and is brought alive with small details, expressions, and mannerisms unique to the dragonborn.  And yet, it still leaves room for individuals to distinguish themselves from others or, at times, reject the dragonborn society altogether.

On the other hand, in the end, I can't help but feel like not a lot really happened in this book.  There is an immediate concern in the novel, and that is ultimately solved.  And along the way, there are dozens of small plot points that are introduced, some of which grow in stature such that they loom very large by the novel's end.  But ultimately, the book seems largely there to set up the story in the next, which (if I'm understanding correctly) may well be the ultimate book in this series.  Some of this problem in direction may stem from the fact that apparently about half of the critical events in this book were dictated by the game designers and their publisher.  The story Ms. Evans really set out to tell is what will be in this next book.

I did enjoy the book. But the more I think about it, the more I think that the interventions of the WotC team really did hurt this novel.  It doesn't have the tight, satisfying feel of Fire in the Blood, and as a result it's not a strong a book.  Nevertheless, that doesn't dampen my enthusiasm for the series or its characters, and I'm very much looking forward to the next book in the series.
Posted by Berliad at 9:38 PM No comments: