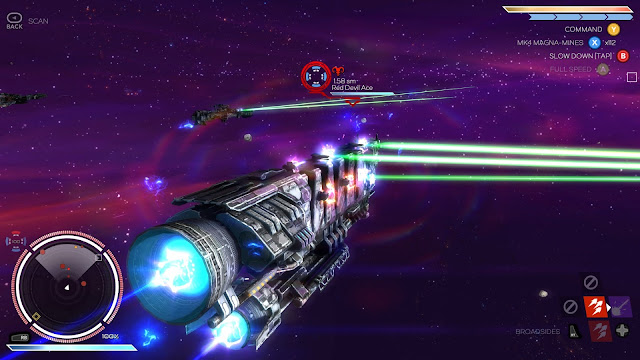 I picked up Rebel Galaxy by Double Damage games on a whim when it appeared in a GOG sale.  I hadn't heard much about it, but I've long been a fan of the Wing Commander: Privateer and Freelancer games.  I love open sandbox "worlds" with space combat, trading, and more.  Rebel Galaxy promised to provide that kind of experience, with the added bonus of flying around in capital ships!

For the most part, it really delivers.  The capital ships you fly are large, imposing hulks of metal that turn slowly and but are loaded with weaponry, shields, and armor.  They are just maneuverable enough to make combat interesting; you never feel like you're flying about in a nimble fighter, but you have to pay attention to your positioning in combat.  While most ships have a nice assortment of highly-effective turrets that can be levied against both fighters and capital ships (these were almost always set to auto-fire when I played), you also have an array of broadside cannons along each flank (think pirate ships!).  Combat becomes a matter of maneuvering to keep your broadside pointed at a consistent flank of the enemy ships so you can whittle down his shields, while simultaneously avoiding his broadside cannons--not to mention the other half-dozen capital ships nearby, along with a dozen fighters all buzzing about.  When the heat gets too intense, you can engage an extra layer of deflector shield, and use "afterburner"-style engines to boost out of the thick of trouble.  Of course, your opponents have access to similar engines, and often will follow in pursuit.  Combat effects--light, sound, etc--all just felt right.  As the game progresses, I found myself immersed in epic battles between fleets of craft.  I felt like I was in the battle of Endor at times, and that's the mark of a good space combat game, in my view. 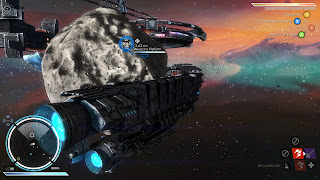 Combat is most of the game.  There is an enjoyable trading economy, with a variety of commodities that could be bought and sold for significant profit throughout most of the game.  You spend a lot of time doing a variety of missions.  Some of these are simple bounty or courier missions, while others are more interesting: escort, blow up the base, recover a stolen artifact from a ship, etc.  These were randomly generated, but it worked well.  Like most space games like this, the chronic lawlessness of the systems is staggering--how on early can those pirates afford dreadnaught-class ships anyway?  Ah, who cares, it's fun to blow them up. 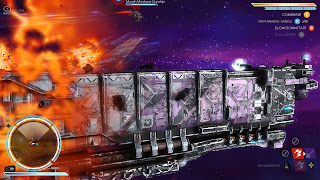 There is a short story campaign to play through as well.  While short, it's interesting enough, and the writing and voice acting is solid and sometimes excellent.  I finished it before progressing into any of the really big ships, but I'm not far off, and I might play a bit longer with the randomized missions and bounties.

Also, I should say a word about the soundtrack.  Rather then the generic classical symphony we usually get in space games, they opted to take a big risk and went with a kind of garage band meets southern rock sound.  As strange as it sounds, it really works, as the game tries to paint the setting as a sort of wild west in space.  I found myself humming many of the games' tunes during the day, and sometimes would pull up the game just because I started thinking about the muscle.

Overall, this was easily worth its current $20 price tag.  I put a good month into it, and I want more.  If they posted a DLC story expansion, I'd grab it in a heartbeat.  It sounds like the company is instead developing new games.  If they ever decide to do a Rebel Galaxy 2, I will jump at it. 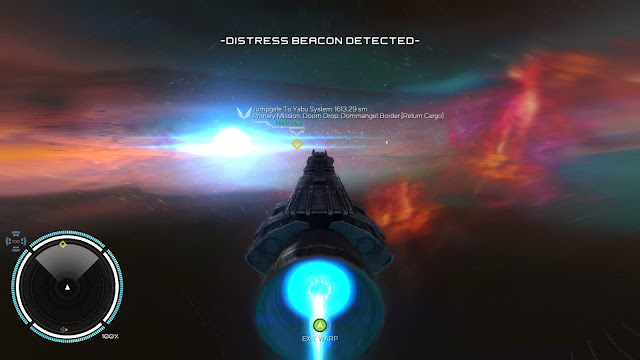 The Subtle Knife by Phillip Pullman

I'm torn on this book.  On the plus side, The Subtle Knife really expanded the universe (universes?) of the series.  As it says in the introduction, the first book was set in a world like our own, but different.  This second book actually begins in our world, but then broadens in scope to a multiverse of settings that all seem to be connected, somehow or another.  Characters can slip from world to world via tears--cuts?--in the fabric of the universes themselves.

On the flip side, while the ideas were interesting, I just couldn't get into the story or the characters.  Lyra Silvertongue, the indomitable lead character from the first story, seemed relegated into supporting, and at times even...subservient?!...role in The Subtle Knife.  She took a back seat to Will, a strong-headed boy with a tough past and fractured family.  It's not that I didn't like Will, but I never really connected with him or understood what made him tick.  The story in this book becomes much darker, and old villains from the first book resurface more powerful than ever, to a degree that seemed contrived.

Ultimately, the book ended on such a down note that my daughter and I felt compelled to take a break from the series and seek out lighter fare.  It was disappointing, because we thoroughly enjoyed the strong female lead and empowering tale of the first book, and had hoped for more. 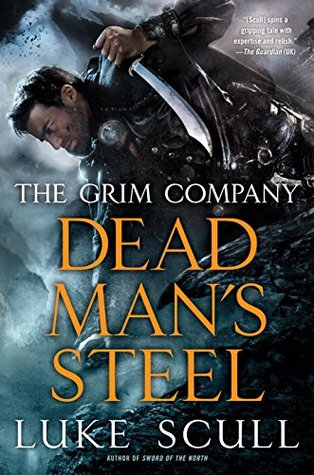 Dead Man's Steel is a good, satisfying conclusion the Grim Company trilogy.  We get complete character arcs for most of the key characters, and resolution of most of the conflict and drama set up in the first two books.  This is a rough world, and one can't expect everything to resolve in happy ending fashion.  Nevertheless, conclusion was fitting, appropriate, and compelling.

The book takes some significant risks.  We finally get to see the Fehd in their full glory, and it turns out that they come with a notable sci-fi slant to them that puts them at odds (intentionally) with the rest of this swords-and-sorcery universe.  Several of the seemingly-insurmountable foes go down relatively quickly, setting the stage of other, arguably even greater conflict as the book goes on.  When the dust settles, the author's playground will have permanently changed.

I think there were a few places where the book didn't hold together quite as well as Sword of the North.  We repeatedly get to re-live the various characters' astonishment at the technology of the Fehd, to a degree that seemed overplayed.  And as the disparate characters all converge together into one party fairly late in the novel, we can almost see the author's glee, but it results in some moments that were a bit too campy for my tastes.  Nevertheless, what I keep coming back to is how deeply satisfying it was to see virtually all of the many plot threads from the first two books run to their conclusion here, with innumerable unexpected twists and turns along the way.  It was a terrific series, with characters that I came to genuinely care about, despite their many warts.  I look forward to reading more from the author in this and other worlds.