Very small thing: I'm rolling up (for fun) some characters from each of the Essentials classes.  I created a small spreadsheet that shows the various ability bonuses you get, and the special abilities they use.  I also identified which classes fit best with each race, based on nothing more than the key abilities noted in the Heroes books and the races that give you bonuses to those abilities.  Here it is:


(if that doesn't work, here's a direct link to the spreadsheet)

Module Review: Prophet, Chapter 1 - By the Will of Kings and Mortals

My vote: 10 - A masterpiece, genuinely groundbreaking.
My character: lv. 8 halfling rogue/ranger from The Cave of Songs.  Ended level 10.

The Prophet, Chapter 1, was released in early 2006.  It did show up on my original nwn1 playlist, but for whatever reason--perhaps it was my general dislike of rogues at the time, for which I perceived the module was designed--I never played it.

Well, I finally sat down and played it over the past month or so.  And I see what all the fuss is about.

Without spoiling the prelude module, you find yourself in search of a long-lost king who vanished mysteriously many years ago.  You essentially have two choices: try to find a bard who might know something, or try to find an ancient keep deep in the forest.  I went for the first option first, which was certainly the low-point of the module; a slow and laborious delve into spider-infested mines that ultimately bears little fruit.  From there, however, I went off to the keep, and the module really picked up.  Ultimately, I was treated to one of the most visually stunning modules ever released for Neverwinter Nights 1.  It is loaded with custom content, and that content is used expertly.  The mountains are just glorious.  Even more impressive, however, was the story.  It begins as a tale of an ancient and perhaps insane king, but becomes far more personal as you interact (via notes, stories, and sometimes, ghosts) with the characters in this story.  Eventually, both the PC and the NPC's find themselves directly involved in the tale, which leads to a variety of surprising revelations.  It is masterfully done.  Rarely have I played a module that sent this many shivers down my spine, but this one was loaded with those moments. 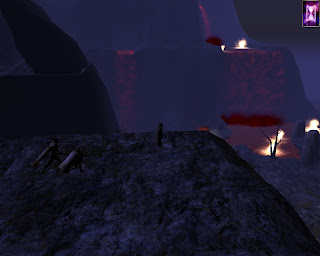 The module plays in a fairly linear fashion, but one thing that Baldecaran does very well is that he adds a variety of small vignettes that you can opt to take on as side "quests."  Rarely are these assigned, per se, and some are just neat to look at.  But you can often have yourself a fun little adventure and often gain a small amount of treasure along the way.  Combat is pretty well balanced throughout, though it got a bit easy near the end of the module.  I'll note that equipment is interesting here.  Perhaps it's because I'm a rogue, but I found myself having a hard time maxing out my AC and weapon enhancement in this module due to limited selection...but on the other hand, physical damage resistance, elemental resistance, and protection against status effects (poison, disease, level drain) were all fairly easy to procure and extremely useful.  I'm looking forward to the day I can find that really great shortsword.  But for the time being, I'm making do with what I found.  As a final note, level progression is pretty slow: I gained two levels during the entire module, and the author's estimated 25 hours sounds about right for total playtime commitment.  This surprises, as I really didn't notice.

I don't vote a 10 very often.  But this is a really special module.  I'm looking forward to seeing where the story goes from here!