With dreams of glory, wealth, status, or other motivations, you arrive in Calimport and enter a tavern in search of work as an adventurer.  While early jobs are rather mundane--rat hunting and the sort--you quickly find yourself in the company of another would-be adventurer and on your first well-paying assignment: caravan escort duty in the Calimshan Desert.  That job, minor as it might seem, is what ultimately results in your entanglement in plots that involve bandits, undead, and even extra-planar beings.  Here are my comments to rogueknight333, the author of Swordflight, Chapter One:

I really enjoyed your module.  The story might not sound original on the surface, and employs a lot of fantasy tropes, but it's well-told.  As you mentioned below, it's clear that you try to put a twist on all of the fantasy tropes that you wield.  The result is a fresh and engaging tale that got my youthful adventurer off the ground and on his feet in tales fit for bards.  The entire module is meticulously polished, and was a blast to play through.

Combat is most definitely very challenging.  Heeding your warnings about combat difficulty, I brought a level 2 fighter/rogue that I had from another module into this game.  The module seemed very well-balanced for him.  In fact, in a lot of ways, the module seemed custom-made for my character.  I've never made so much use of usable items like choking powder, potions, etc.  And because he had good use magical item ability, he was also able to make heavy use of magic wands against foes.  The result was a really dynamic combat experience that I found really enjoyable.  My character would probably do better if he had a henchman to tank for him, but he held his own.

Thanks for the fun module!  I'm eager to see what the next chapter will bring for my character and his companion!

Posted by Berliad at 3:08 PM No comments:

Review: Fire in the Blood by Erin M. Evans 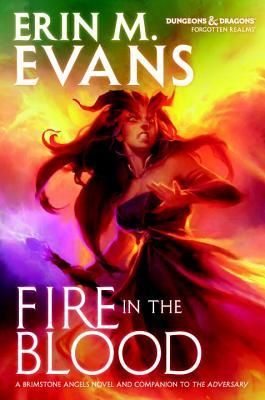 Having survived the Shade's internment camps and come to grips with the missing years in their life, Farideh and Havilar travel to Suzail, capital city of Cormyr.  There, they hope to give Brin time to work out the problem of his engagement to the Princess of Cormyr, Raedra Obarskyr.  At the same time, Farideh must wrestle with the recent discovery that she is a Chosen of Asmodeus, and the terrible power that comes with such an arrangement.  Dahl and Vercaras also are in the city, and hope to investigate the disappearance of one of their Harper operatives in the city.  But hoping for any respite to get one's bearings proves impossible, for Cormyr is at war with the Shade, and life in a country at war is anything but predictable.

Fire in the Blood is my second Erin Evans book.  I began reading with The Adversary, which I thought was excellent.  This book, however, was another step forward.  The challenge in the Adversary was largely one of isolation.  This book, however, puts Fari and Havi at the center of a vast conflicts that erupt not just among political factions within Cormyr, but also between the nations of Cormyr and Netheril.

All of the major characters undergo a great deal of development in this book.  Havilar must wrestle with the strains that reality place on her now-adult relationship with Brin, who is pulled between duty to his country and his love of Havilar.  Farideh must continue to struggle with her relationship with Lorcan, the half-devil, and the question of whether to pursue it as a romance or write it off as nothing more than the pact.  The character, however, who really surprised me in this book was Dahl.  After returning, unexpectedly, to field operations in the Adversary, Dahl is back in full action in this book--and proves time and again to be exceptionally good at his job.  He continues to be plagued by his fall from paladin-hood with Oghma, but his regrets over his past no longer smother him.  In fact, he often thrives, and may be the most effective character in the book.  We are also treated to a full development of Princess Raedra, who proves to be a nuanced, powerful figure in her own right, with no shortage of humanity.  In many ways, this book is her story, and it's worth every page turn.

As with the Adversary, all of this goodness is rooted firmly to Forgotten Realms lore, both on Toril itself, as well on other planes, including the nine hells.  There are nods to current events in the realms, including the current Tyranny of Dragons storyline.  There are also references to events in other recent Realms books, such as the siege of Marsember in Troy Denning's The Sentinel and the future massing of armies to attack Myth Drannor, as told in Ed Greenwood's The Herald.  I also found neat connections to other Realms stories that I'm reading.  For example, Raedra made mention of Alusair Obarskyr, the Steel Regent, a prominent figure in Cormyr's history.  She also made an appearance in Tiberius's Neverwinter Nights module, Saleron's Gambit, which I was playing as a read this book.  It is these kinds of connections that makes reading and playing in the Forgotten Realms so much fun.

This was the best book I've read all year long, and I've had a lot of fun reading this year.  Highly recommended to everyone.

Link: Current bookclub discussion of Fire in the Blood at Goodreads!
Posted by Berliad at 3:30 PM No comments:

This is one of many posts I've made on Saleron's Gambit.  As the last "review" I made was for Chapter III of the series, I'll begin by assuming that module as background.  The series is available as a combined download on Neverwinter Vault, so this post focuses on chapters IV and V.  If you'd like to read my thoughts on the first three modules, they can be found here: I, II, and III.

Having located Natalya in Chapter III, you have learned of how the two of you, along with Saleron, are linked by your murdered parents.  Now united in your goal to rid yourselves of the sinister threat imposed by the Dread Lord Vraxilom, you travel to the remote island of Ajit-Kuhn to find instructions for a ritual that might free you.  Little did you know that it was there that you would finally come to learn the greater truth about your parents, and ultimately make your mark on history.  Here are the comments I left on the Vault's module page:

This was a terrific module series.  The story begins as fairly traditional "Farm Boy Rises Up" tale in the early modules, but gradually goes far deeper.  The story becomes increasingly complex, but it is told in a way that makes it both approachable and, most importantly, personal.  I think this is ultimately one of Tiberius's great strengths.  He allows me to connect with stories on an emotional and personal level.  His NPC's are well-realized,  his locations richly presented, and the story is well executed.  But he keeps the focus squarely on the player character and his place in the story as well as any other module author.

I loved that this series is, in some ways, an homage to some of the great Infinity Engine games of the past.  Areas, events, and characters from Baldur's Gate II appear prominently in chapter III and, more ephemerally, chapter IV, whereas parts of Chapter V take strong inspiration from Planescape: Torment.  Moreover, it is extremely well-grounded in published lore of the Forgotten Realms, again featuring numerous appearances from known NPC's, areas, and even plot ideas that have been published over the past decade.  In a favorite example of mine, the Steel Regent, Alusair Obarskyr, makes a prominent appearance in Chapter 5.  What's great is that I'm currently reading Erin Evan's terrific Fire in the Blood, and the very night I encountered Alusair this module she (or her ghost, rather) appeared in the book.  This is why I love reading and playing in the Forgotten Realms!

It also is an important module because of its emphasis on low-power gameplay.  While there are a handful of magical artifacts in the game, they are rare and well-prized.  Your character's innate abilities, along with consumables like potions, are what ultimately make the difference for your character when trying to survive through his modules.  Combat in the last two modules was very well-balanced for my melee-oriented bard, who could use his buffing spells and abilities to overcome his native weaknesses in attack modifiers and HP.  I'd guess that it would work well for a fighter-type as well, as long as you made aggressive use of potions.  Wizards and Sorcerers, provided they can survive the first module, really would seem to shine in this game.  Their spells would largely be unmatched by your non-magical opponents, and you will do battle with several magical casters that prove very potent opponents for those without a good way to penetrate their defenses.


I've played both this series and the Maimed God's Saga.  Both are excellent, but I think the tone of the two modules is different.  Maimed God is very mature, gritty, and serious.  Saleron's Gambit, on the other hand, is a bit more jovial and lighthearted, despite the fact that it is quite challenging.  The villain in Saleron's Gambit, for all his power, is a bit of a buffoon, and is quite a contrast from what you fight against in Maimed God.  Nevertheless, the story itself is gripping, and just becomes more and more interesting as you move into chapters IV and V.  I'm glad to have finally had the chance to play it all the way through.

More screenshots after the jump!