How tough is too tough? Encounter design in 4e 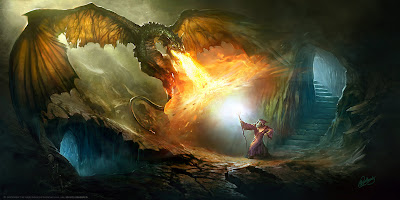 As with the prior article, if you're playing in my RPGX game and would prefer not to have your illusion of immersion damaged, you might not want to read this.  You've been warned!

Recently, I managed my first kill as a DM.  Killing a player is certainly not a goal of mine as a DM, and I felt pretty horrible about it.  In play by post games, in particular, players spend hours crafting not only their character's mechanics, but also their backstories and relationships.  Play by post as a medium is extremely good for encouraging deep roleplaying, and I've been fortunate to have a group of players who enjoy doing just that.  Therefore, it is no small thing to kill off one of their creations.

DnD 4th edition has a reputation as a system in which player death is extremely difficult to achieve.  In fact, the lack of lethality in 4th edition is one of its most common criticisms.  But without intending to do so, I managed to kill off a PC in what was intended to be a pretty uneventful encounter.

In this case, my players were working their way through a small dungeon based on a mini-delve created by Benoit over at Roving Band of Misfits.  They came upon a trapped door.  Without even bothering to check for traps, our party's Skald opened the door, launching a combat as a series of constructs came to life and attacked the party.  The biggest of the constructs rolled high on his damage dice on charge attack against our party's squishy thief, which pushed him just past his negative bloody value.  In one punch, he went from bloodied to dead.

I was pretty sad about this.  Thanks to the player's wonderful efforts to flavor the thief, he had become one of my favorite characters in the game.  And while his death has allowed for some excellent roleplaying opportunities for other characters, I still would probably have rather preferred that it not happen.  The party ended up abandoning the dungeon before they could fully appreciate the story around it, I think it hurt the group's enthusiasm for the game a bit to see that character die in a meaningless sidequest.

In any case, I've been trying to decide if my encounter design is to blame for what happened.  The DM Kit recommends the following distribution of encounter levels during each level:


Prior to this, I'd given my 1st level party three encounters, which were pegged at level 2, level 4, and level 2, respectively.  The first encounter was pretty easy.  The second was very challenging but do-able, especially because the biggest threat ran away at the end of the combat.  The third was a little scary (due to a lurker), but ultimately was over quickly.

This encounter with the constructs was technically avoidable.  Players could have rolled a series of thievery checks to disable the trap system on the door, though it would take good rolls from their thief to do so.  It was also possible to turn off the constructs with a combination of successful arcana and thievery checks during the combat, and the constructs were also set to reset if the players exited the room the way that they came (they tried neither of those approaches).  Finally, it was the only real encounter I had planned for the entire dungeon, and that the characters were fresh from an extended rest with full resources.  Therefore, given all of this, I pegged it as a level 2 encounter: hopefully challenging, and a punctuation mark on the mini-delve, but very much within their scope.

I only had four monsters to oppose my party of six:


This seems pretty reasonable, even in retrospect.  If I made a mistake, it was probably in not de-leveling the Constructor enough.  Taking it down to level 3 would still allow it to be an imposing figure, but he'd have about 20 fewer HP (as an Elite), hit slightly less hard, and have slightly weaker defenses (which were already low--he's a brute).  And given that it was a sidequest, without any real bearing on the main campaign plot, I could have knocked off one of the iron defenders to get it into level 1 encounter territory.

In the end, though, even if I would have done these things, the constructor might still very well have killed the thief.  When you use elites, solos, or lurkers--enemy types designed to make attacks that do the damage equivalent of several rounds or opponents in a single strike--it's pretty easy to kill off a player without intending to do so.  In fact, the same thing almost happened in the prior encounter when I used a level 4 lurker against the party: a character was within 1 or 2 HP of her negative bloody value.  Those things hit hard!

It may well be true that 4th edition is less lethal than prior editions of Dungeons and Dragons.  But it certainly is still very possible to kill your players by accident!  When designing combat encounters in the future, I will probably be a bit less aggressive with encounter levels, and will pay more attention to not just the monster XP budget, but also the levels of the individual monsters in the encounter.

Setting a soft limit of party level +2 to the monster level seems like a good rule of thumb (even though I've seen +3 mentioned somewhere--which is what I did with the Constructor).  I'll also probably make plot-irrelevant sidequest encounters be built at the characters' level or lower.  If I'd done two iron defenders and a level 3 Thaalud Constructor, I'd still be at 600 XP (level 1 encounter for a party of 6), and my feeling is that the players would still have felt that it was a fitting challenge in that tomb.

That said, maybe what I did was actually pretty reasonable and I'm just feeling gun-shy!  Combat is supposed to feel scary, after all.  Monsters are dangerous and unpredictable tools for the DM.  The fact that their effectiveness is dictated on the randomness of dice rolls is part of what makes the game exciting to run: even the DM doesn't know how it's going to turn out!
Posted by Berliad at 10:30 PM