Book Review: Night of the Hunter by R.A. Salvatore 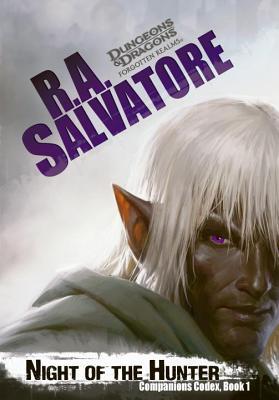 Night of the Hunter continues the Drizzt's story as he finally reunites with his companions and gains a new lease on life.  Simultaneously, it tells the story of a major move by the ruling houses of the drow--and, by extension, Lolth--to consolidate their power in Menzobarranzan, and ultimately bring conflict to the surface world.  And while that's happening, we also have the story of Artemis Entreri and his companions as they piece together what to do with themselves now that Drizzt has left them.  As one can see, there's a lot going on here, and it's only as the novel reaches its conclusion that the disparate threads coalesce into single narrative.

The best part of this book is unquestionably the interesting look into drow culture.  It tells the story of how the ruling matron mother, apparently guided by Lolth herself, is able to thwart the many schemes of her rivals while simultaneously bringing them under her command.  While I'm not a big fan of drow, I really enjoyed this component of the book.  I've often wondered how a group of such conniving, backstabbing people could still somehow achieve a structured society.  This book provided a great look into a way that it could work, at least with the help of their horrible goddess.

Having survived a close brush with death, and finally in the company of those he loves most dearly, Drizzt seemed surprisingly passive in this book.  He does his share of swordsmanship, of course, but largely seems to take a back seat to the immediate needs and desires of his friends.  And it makes sense: he's so overjoyed to see them that I can imagine him wanting little more than to spend time with them.  The result is some thrilling battle sequences as they venture into Gauntlgrym, along with some delightfully cheery character interactions scattered throughout the book.

There was one place where I found myself disappointed, however.  I've seen Bob Salvatore talk about how the Sundering is an opportunity to return to the classic, simple, black-and-white of the past.  He seems more comfortable in that framework, but to me it is the gray that has made his more recent books so interesting.  I was particularly saddened to see his star characters dismiss the notion that a certain race of humanoids might not be, at their core, destined for evil.  Drizzt himself struggles with this notion throughout the book, but I'm hopeful that future books will show at least some exceptions to this rule.  Worlds are more interesting when there are shades of gray, rather than the strict black and white of humans vs. monsters.

That all said, it was a fun book to read.  It's not my favorite of R.A. Salvatore's books, but it sets up a pretty interesting scenario for his future books to explore.  I'm looking forward to the next one.