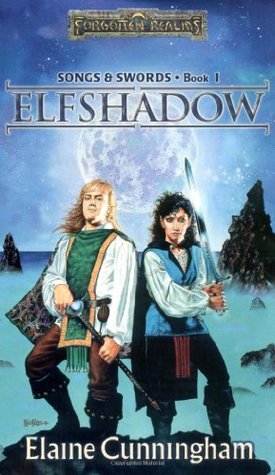 Arilyn Moonblade is a half-elf assassin.  Or, perhaps, Bounty Hunter might be the better term.  Almost unequaled with the blade, she works contracts for a number of shadowy organizations, most prominently among them the Harpers.  But recently, even as she successfully dispatches agents of the Zhentarim, someone else is hunting Harpers.  For each Zhentarim who falls, it seems, so too does a dear ally.  And worst of all, despite not knowing anything about it, signs are starting to point to Arilyn.

Elfshadow was my first Elaine Cunningham novel, and it apparently was her first set in the Forgotten Realms.  I think the thing that stood out to me the most about this book was its characters.  Arilyn is a great character: focused, ruthless, impatient, and stubborn, but still possessed of a strong moral compass.  Along the way she is joined by Danilo Thann, a bard of significant magical skill who spends his time posing as an aloof dandy.  The two make for an unlikely pair, but the fact that they are almost forced into companionship by the events of the story results in surprising synergy, in addition to some genuinely hilarious moments.

I found the plot to be interesting, even if a bit convoluted.  It delves into a lot of backstory about tensions between races of elves within the Realms, which was really interesting to learn about.  I've read my share of Realms books, but distinctions between Moon Elves, Sun elves, etc, have never been given much attention in those books.  The story made sense, but I will confess to occasionally having some trouble following it.  I also thought that Cunningham's writing ranged from excellent to a little bit clumsy in some areas.  I'm no genius with prose, to be sure, but I did feel that she had a tendency to overuse certain writing patterns.  For example, she often referred to Arilyn as "the half-elf," which works a few times per novel but not the dozens of times it was used here.

Overall, it was a fun read.  I'm probably going to read a few more of her books in the coming months at the suggestion of a goodreads friend, and I'm looking forward to seeing if these characters continue to appear.
Posted by Berliad at 9:51 PM