Review: Sword of the North by Luke Scull 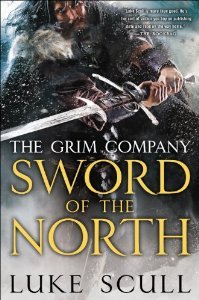 The first book in this series, the Grim Company, was full of massive, shocking, world-changing events.  Scull built us a fascinating world and then wasted no time in tearing it down in breathtaking fashion.  Sword of the North unquestionably has its one share of realm-shattering changes, but, as its title suggests, this novel a bit more focused on its characters.  The headliner story follows Brodar Kayne and his companion, Jerek the Wolf, as they return to his homeland to help Kayne's son and wife.  Along the way, we learn about their past, and through the eyes of other characters introduced in the first book, see glimpses of what is transpiring in the North.  Meanwhile, Scull's other characters tell the tale of what is happening in Dorminia after the fall of its Magelord, and start to uncover the mystery of the City of Towers to the east.

I've long felt that one of Scull's greatest strengths was his ability to craft deep, unique, and interesting characters.  While we got to meet each of them in the first novel, it is in this book that they really start to shine.  Each has depth, biases, and just enough nobility to keep them likable despite their deep flaws.  Kayne was my favorite character from the first novel, and in this novel we re-live his storied life at both its high and low points.  Kayne is part hero, part pragmatist, and part seasoned warrior well past his prime.  For all of his flaws and weaknesses, and they are many, he has become one of my favorite fantasy characters.

There are many interesting themes that are explored in the novel as well.  What price is really worth paying for free will?  At what point should an honest, brave man surrender in the face of an unstoppable foe?  When a town full of scum and lowlifes is slaughtered by an invader, who is in the right?  There aren't firm answers provided to these questions, but the narrative lets you wrestle with them as you watch Scull's characters do their best to achieve their goals--and often fall short.

This is a genuinely excellent book.  While it certainly sets up a dramatic conclusion(?) to the story in the third book, I honestly have no idea what is going to happen, who will survive, or even what "victory" for the characters might actually look like.  Nevertheless, I know that it's going to be exciting to find out.
Posted by Berliad at 9:55 PM