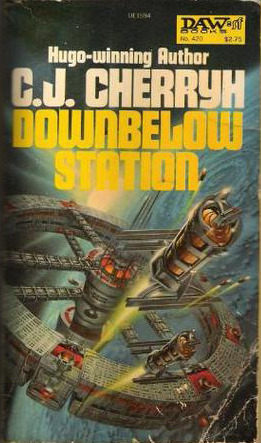 Downbelow Station featured an incredibly well-built future universe, ripe with intrigue. I found the pacing to be excellent throughout--even the opening chapter, which, despite reading like a history book, was fascinating in its innovative take on the economics of humankind's expansion. I loved the emphasis on realism throughout the setting. While there were a few key technological marvels, like jump drives, there were limitations as well. Sensors, for example, became ineffective at high speeds, making ship-to-ship combat reminiscent of scenes from submarine novels as crew struggled to find the location of other vessels. Ship-based gravity still depended on centrifugal motion (no mass effect technology here!), and disruptions to course or rotation were physically jarring to crews. Similarly, while much of the book focused on life on a space station, the major challenges were often very basic: food, water, shelter, and the dangers of riots and anarchy.

Generally, it was just a great book. The characters were vivid and deep. The story was full of unexpected twists and turns, and yet managed to avoid even a hint of contrivance, at least in my view. The writing style was a bit harsh and conversational, and leaned heavily on sentence fragments for drama. Furthermore, the author doesn't always spell out the characters' intentions. Usually, this was done to positive effect, but sometimes it resulted in confusing passages. The overall narrative was just so compelling, though, that moments like this were short-lived and quickly forgotten.
Posted by Berliad at 10:36 AM