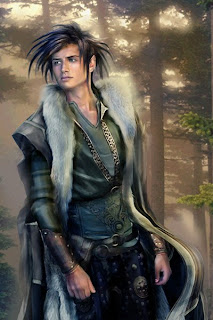 If there’s a typical half-elf appearance, that’s basically Armin: brown hair, cut short, 5’11”, 160 lbs, slightly tapered ears, more slender than a typical human, but bulkier than a typical elf. Upon closer inspection, however, one does notice a few unique characteristics. His eyes, though they appear brown at first, seem to have a subtle, flickering, iridescent red quality to them when he stares intently at you. Second, his posture isn’t what you’d expect for someone with elven blood running through his veins; though a good athlete, he holds himself with a small slouch in his back, as if he were shouldering a great weight.

Armin is a friendly, amicable individual prone to good natured humor. Speaking with him for only a few minutes, you might begin to think that you were making a new best friend. He is confident, listens well, and is quick with a compliment. While hardly a storyteller—in fact, he is often quite evasive, if not deceptive, about his past—Armin tactfully involves himself in conversations and seems memorably innocuous.

Some of that, however, is a front. He rarely makes lasting friendships, and in conversation is extremely evasive about his past, his motivations, or his plans for the future. A person might spend an evening thinking she was really getting to know him, only to realize the next morning that she spent the evening talking about herself...and that Armin is now nowhere to be found. Uncommonly, Armin has even been known to vanish with someone’s gold or other treasures, never to return. He is not an evil man. But he seems haunted by something in his past, and seems to be wandering his way through life without goals or purpose.

What good are choices when all of your options are terrible?

Armin was born in a small farming community on the outskirts of a major city. His mother, Serah, was single, and he didn’t know much about his father. Serah told him that he was a ranger of a sort, and as Armin grew older he surmised that he was the product result in a one-night affair. His mother was dedicated and loving, however, and worked hard to give Armin a place in the world. Among other things, this included a first-rate education. They could barely afford it, but she felt it was the best gift she could grant her child.

As he entered his teenaged years, however, a summertime drought dealt a severe blow to the farming community where he grew up. As farmers’ crops failed, food prices soared at the same time that the community’s income faltered. Refusing to abandon her hopes for her child, Armin’s mother moved them to the city and fell in with an organized crime syndicate. She served as a courier for over a year, transporting ever-increasingly sensitive materials to and from crime bosses. She quickly earned her superiors’ trust, able to conceal important documents and treasures through dangerous roads and military checkpoints alike with a combination of girl-next-door charm and a knack for stealth. It paid well, but she was often away from home, leaving Armin to fend for himself. He spent much of his free time in the library; Armin was a good student, and was considering a career in either wizardry or law. During this time, he met and befriended Belkin, an elderly wizard who had spent most of the last 20 years reading his way through the stacks of arcane volumes in the library’s archives. In those occasional nights when his mother was home, however, the two of them defied the typical relationships between parents and teenagers, remaining very close.

One day, however, his mother was intercepted on one of her missions by a competing syndicate. They beat her brutally. But even worse, they stole from her a vital portfolio of information full of secret details about personnel, safehouses, and current schemes within her syndicate. The price for such failure was certain death for both Armin and his mother at the hands of their assassins. And her superiors would know what had happened within a day’s time.

The old Wizard stared into his book for a long time after hearing Armin’s request. Slowly, he raised his eyes toward the youth. “Do you understand what it is that you are asking? This is not something that can be undone. You may well be forfeiting your soul.”

“I understand—I do, really. But this is our only chance. You have to help us!” Armin replied desperately. Just last week, Belkin had delighted in telling Armin of how he’d found a loophole in the convoluted laws of the hells that would permit someone to steal immense power from infernal lords. He longed to put his idea to the test. But, as the old man told him, he was too close to the afterlife to be picking fights with devils.

Now, in his despondency, it seemed Armin’s only option. They would try to run, but the Syndicate would surely track them down. They had no chance in a fair fight, much less the ambush that would surely await them on a moonlit road as they fled. He was desperate, and here seemed to be a solution that could save them.

“I am sorry Armin, I want to help you, but I can’t do this for you. You are too young to be making this kind of a decision,” the old Wizard replied.

“What good is a soul if you lose your entire world protecting it? I’m as good as dead without this, and so is my mother.” Armin replied.“Please.”

The old man gave him a long, sad look. “May the Gods forgive me.” He turned, lifted an enormous tome from the shelf at the back of the room, and led the youth down a long flight of stairs into the depths of the library’s cellar.

Armin stared at the sword in his hand. It was black upon black, and seemed to absorb all light cast upon it from the flickering torches nearby. Turning it to the side, he saw that it was almost without a third dimension: it was infinitesimally thin, and seemed impossibly sharp.

Tonight had been terrifying. But the ritual, horrible as it was, seemed to have gone as planned. Armin could feel a sinister power coursing through him, and knew that it would take him a long time harness it. In the meantime, however, he hoped it would be enough. He hurried to barn just outside the city, where he had brought his battered mother for safety while he visited with Belkin. Now, with luck, they could have a head start before her employers learned of what had happened.

As he entered the barn, he saw his mother look up in relief. Through the darkness, he could see that one of her eyes was swollen shut. The other paused for a moment when she saw the sword sheathed at his side. “We must go,” she said urgently. But in the next moment, arrows shot through the room, grazing Armin’s shoulder.

The room was a blur in the darkness. Armin unsheathed his sword, which moved as if guided on its own as he struck out at their attackers. Armin felt blood splattering on his clothes as he fought. With each foe he felled, the sword emitted a burst of energy that seemed to feed his strength. They came at him from all sides, but were no match for this blade of annihilation and its wielder. Here, in the thick of combat, Armin felt unstoppable.

Just as he began to think they might survive, however, he heard a sickening thud behind him. Slicing through a last combatant, he turned to see a lone assassin standing over his mother, where she lay covered in blood. In a rage, he screamed—and as he did, bolts of energy shot from his hands. The first shattered the man’s torso, detaching his arm and crushing his chest. But the second shot to the right, striking the support pillar in the center of the barn and causing it to buckle.

In an instant, the barn came crashing down around him. Armin lay for hours beneath the rubble, sobbing. While he had survived, but he knew his mother was dead. And somewhere in the distance—or maybe just in his head?—he could hear a deep voice laughing at his plight.
Posted by Berliad at 10:52 PM