I got the good news today that I made it into a play by post group over at DnD Online Games.  I had gotten the impression some time ago that these kinds of games were almost entirely narrative-based.  But upon investigating, I found that the games that folks play over there can include combat, complete with grids, etc!  Given that I have essentially given up on injecting actual tabletop games into my life for the time being, this is probably my best alternative (in addition to video games).  I'm pretty excited to give it a try.

The game I joined is called The New World and designed by a guy who calls himself Enthusiast.  It's a neat concept: a well-established, culturally developed Empire discovers and colonizes a new continent, and we're playing just 30 years after the first settlement was founded.  The continent is populated by shifters, an indigenous people who possess primal magic.  The game is essentially the story of how this empire attempts to take hold in this New World.  Mine was one of 29(!!) different character applications submitted by 24 different people, so I feel incredibly fortunate to have been in the group of 7 that made it in...especially given that this was my first try!

Here is my character application: 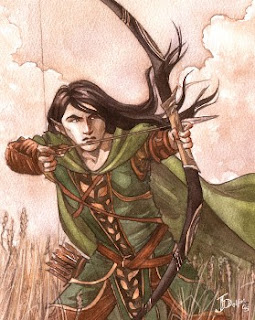 Appearance and Personality:Erethil is smaller than a typical Elf, and is slightly built. Yet even by elven standards, he is unusually graceful. He moves about in smooth, quiet steps that allows him to go unnoticed in both the wilderness and urban settings. He has black hair that is often tied back, and sharp eyes that he uses to pan about the room. It is as if he sees everything.

Erethil can come across as a bit gruff; he's generally quiet, but quick and to the point when he has something to say. He prefers to avoid long conversations and chit-chat, and has no qualms about walking for miles with a companion and not saying a word. That said, he has learned to work amicably in a team via his experience as a wildness guide, and is a reliable, generous companion to those he trusts.

Background:Erethil was among the first Erathic children born in Medrona. His mother was a dignitary of some importance in Amarin, where her father was a sergeant in the local militia. When Erethil was just 10 years old, however, both of his parents went missing while traveling to Port Calia shortly after its founding. His parents were not wealthy, but left him with sufficient resources to survive until he had completed his education, while his mother's colleagues were available to help him on his way.

Nevertheless, Erethil spent much of his teenaged years roaming the wilderness between towns. At first, it may have been in a desperate attempt to learn what happened to his parents. But the long months spent in solitude also brought Erethil solice. He found himself in awe of the combination of beauty and brutality in the natural world, and in time began to feel intimately connected to it. Through careful observation of the cunning fox, he learned how to deftly maneuver to avoid threats while in danger. By watching the wolf spider, he learned the power and efficiency of stealth and a sudden, deadly attack.

Erethil became an accomplished hunter, renowned for his accuracy with the bow and uncanny ability to down his quarry with a single strike. His preferred hunting grounds are in the Oliddian Wood, the lush coastal forests between Olid and Amarin. Able to make a modest living selling game, he also has found employment as a guide. Wealthy Imperial citizens, recently arrived in Medrona, take comfort in hiring him as a guide as they travel between settlements along the coast of Medrona.

While comfortable, Erethil continues to be drawn to the wilderness. He has rarely interacted with the nomadic clans of shifters that live on the continent. But what little he has seen of them hints at their deep connections with the natural world, which manifest in powerful primal energies and powers. When the Baron of Olid sent an appeal for adventurers to procure a mysterious artifact, Erethil jumped at the chance. Perhaps this artifact might hold some secret that would allow him to grow more in tune with the wilds.

RP Sample:From his perch in the treetop, bow drawn, Erethil watches his prey. The deer has been milling about on the other side of the brush. While he could hit it now, the cover might keep him from targeting it precisely at the base of the neck. Such a strike would kill the deer instantly, preventing both pain for the animal and noise that could attract unwanted attention. With a bit of patience, soon he will have a perfect shot.

Suddenly, from within the brush, something stirs: the doe has a fawn! Lowering his bow, a small, contented smile forms on his lips. Erethil might not sell a deer today, but the snares he set up nearby were sure to provide dinner. For now, he could simply watch the beauty of a mother caring for her offspring.

That RP sample took a long time to write, so I'm hoping I get faster at this kind of thing!!

My character sheet is currently hosted on DnDOG's character sheet system, though I'm looking at Character Distiller as an alternative...But that's a post for another day.