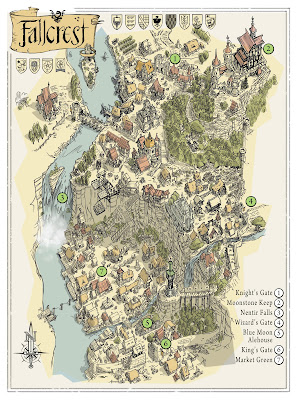 Edit: I discovered tonight (11/15) that the author below has removed a substantial number of his old posts.  Whether that has something to do with this post, or is just a coincidence, I don't know.  If I offended or otherwise freaked you out, Brandon, I do apologize.  I just really enjoyed your stuff.


One of the fun things about being so late on the scene with DnD 4e is that I get to discover wonderous things that people have probably known about for a long time.  One of those is the work of Brandon Kruse at DnD Doodle.  His masterpiece reimagining of Fallcrest is to the right, and has been widely circulated, often without credit.  I myself first found it at an Obsidian Portal website.

The thing that's so exciting about Brandon's work, aside from its obvious brilliance, is his cartoony style.  Since I'm largely running my campaign for a group of little kids, I want to try to keep things a bit lighter than a lot of campaigns probably do.  As such, the stock DnD art isn't always ideal.  Kruse's area maps invoke excitement and fantasy, while his character sketches have a whimsy and humor that I think the kids will find very approachable.  For this reason, I've largely abandoned my plan to get my players into the Forgotten Realms as soon as humanly possible.  The Nentir Vale will work great, mostly because I get to use this art!

I'm using Masterplan now to write my post-Twisted Halls adventure, and one feature I really like is the ability to broadcast maps to the players via a separate monitor attached to my laptop.  I'm planning to use this ability, and/or some powerpoint slides that do the same thing, to send a lot of Kruse's images to the screen.  My players will be able to see the town, the buildings they will visit, and even characters via this interface.  It should be a lot of fun.

As such, I've decided to do a quick index of Brandon's work here in this post.  I'm doing this mostly for myself, but if someone out there finds this useful, rock on.

Maps
Along the King's Road
Cave Drawing
Dwarftown (his version of Hammerfast)
Dwarftown - Top Floor
Dwarftown Underground
Fallcrest
A Generic Town
Goblin/Bandit Camp
Harkenwold
The Lonely Tower
Nenlast
Nentir winding way out of vale
The Restwell Keep on the Chaos Scar
River RoadRoad to fallcrest - Similar to below scene, but more of a map
A road through the wilderness (DM + Player)
Rushbottle and Camp Ozborg (south of Vale)
Thunderspire and surrounding areas
Winterhaven DM Map