As I've been getting into DnD the last few months, my older daughter has been showing some interest as well. As I've discussed before, she is playing a knight in our family game with my niece and nephew, but she needs a lot of help to make it work.

Because we may go months in between sessions (rest of family lives a few hours away), I've been toying with playing a solo game with my daughter on the side. It was with that thought in mind that I happened again upon NewbieDM's rpgKids, a simplified game inspired by 4e dnd that is appropriate for a little kid.

I ponied up $5 for the original package plus his just released expansion pack. The rules are pretty simple, but there's decent depth to them. There are four classes (equivalent to ranger, fighter, wizard, and cleric), each with their own style of attacks and a unique set of skills. But regardless of your class, all combat ultimately comes down to competing dice rolls: the hero rolls a d12 against the monster's d12, and if the hero gets a higher roll, he hits the monster. There are a few roll modifiers, and you can complicate it as much or as little as you wish.

For example, I opted to add opportunity attacks and shifting to the game.  This was easy to do, makes the game a bit more tactical, and will be good training for her when we go back to the bigger kid table with true dnd. I also opted to give the fighter-type class more "hitpoints," which I think are appropriate to help balance him against the other powerful classes.  Coupled with opportunity attacks, this makes the fighter class an acceptable defender. 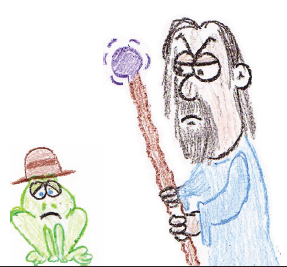 It took my 5-year old about 1 full round to pick up the core combat mechanics. By the end if the second round, she was pretty much independently playing her turns, which is great. That's not really possible in dnd right now. And she really enjoyed herself. She didn't want to stop when it was bedtime. She was into the story, loved defeating ghosts in our first encounter, and really enjoyed the artwork that comes with the manual.  She even got creative using her skills--as a ranger-type, she had the ability to track a foe into the woods, and she did a good job of coming up with that use of the ability herself.

I had a blast too.  Hopefully this will be a regular activity in our house!  I highly recommend dropping $5 for rpgKids if you're looking for a fun, creative activity to do with your little kids.
Posted by Berliad at 10:00 PM