It might help to see the comments of QSW and Alazander to make full sense of my voting comments. Also, I've added this author's blog, Undead Men Tell Tales, to my blogroll. 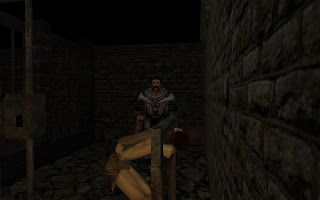 I largely want to echo the comments of QSW, who said it more eloquently than I will be able to. Science Macabre is a very nice little module, and works great as a showcase for the author's writing skills as he stated. The characters all have their own voice, and their own personalities, which is impressive given the relatively small amount of time you have with them. Kell, in particular, was impressive. Romance interests are very difficult to write convincingly, and almost every attempt I've seen in-module (including almost all of the official Bioware/Obsidian products) typically fall flat. And somehow, in one short conversation, I was completely on board with it. Furthermore, the three choices of response provided for the player during most dialogues allow one to portray a wide variety of characters. The roleplaying is very good here.

Furthermore, as Alazander noted, the setting is extremely interesting. Angels vs. Demons vs. Vampires is wicked cool, and has huge potential. As many others have said, I'd love to see more from the author on this front.