Review (sort of): Saleron's Gambit I

I replayed Saleron's Gambit I last night. I somehow never finished the series, despite how enthusiastic I was about the first four. Those saved games and my character are no where to be found today, so I'm just replaying through the thing.

Here are my comments that I left on the module page: 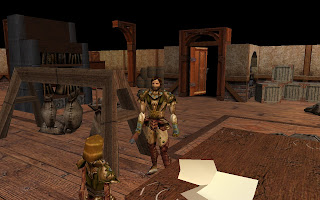 Just posting to say I had no trouble playing through this module using NWN 1.68. Had to download the 1.68-compatible CEP 1.52, and then "upgraded" that to CEP 1.53. It's a bit of a runaround, but it works fine.

Also, this was my second time playing through, and the magic is still there. This is such a fun, unique module to play. Somehow, probably because it's so rare to have to do it (I wouldn't want to do it every time), I really enjoyed running around town trying to scrounge up 20 gp so I could buy some gear. Hint: sell your books! And that gear turned out to be studded leather armor and a club! Yikes. When I upgraded to Chain Mail and a Morningstar at the end of the mod I felt positively wealthy...

Beyond that, the townspeople are all very well conceived in that close-minded, small town kind of way. We didn't see a ton of it, but did get to feel something of the depth of the FR setting in some places as well. As before, it's a module recommended to anyone. 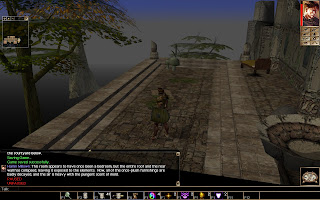 One other thing that I didn't note above but wanted to mention...I really liked how Tiberius was able to use the castle interior tileset to such great effect. The second floor of a castle in this module had lost its roof, and using exterior lighting and abundant trees, you really felt like you were up exposed and up in the tree canopy. Kudos.
That said, it's still pretty short, and has little sense of closure (given that it's the first in the series!). I voted 9.5 in 2005, but if I were to vote again, I'd probably drop it down to a 9 or so (very good, deserves a look). But I'm not going to go back and change vote almost six years later. :)

Salerons' Gambit, Ch.1 is a surprisingly good module for a 1st-level adventurer. All too often, your first level is treated as something to just get by as quickly as possible in many modules. This one lets you experience being a first level character as you would in a pen and paper D&D session. Not only is it a low-xp module (you won't hit level 2 until the very, very end of the mod), it is also low gold and low magic. I had to take out a 20 gp loan to buy enough equipment to even begin adventuring! And even though I played a fighter, I wasn't able to afford any armor higher than studded leather until the very end of the mod. I found this very refreshing and very different from just about any other module I've played.

The story is pretty simple for this module, but that's appropriate given who your character is at the start of the mod – you're aware that more could be going on here than meets the eye, but those questions do not even begin to get answered until the end. Nevertheless, the writing is superb. Especially notable are the fantastic descriptions of each of the main characters that play when you initiate dialog with them for the first time. Execution is overall very good, with good area design, well-balanced and challenging combat, and several nice surprises that occur as you play the mod. One wonderful feature is that the availability of certain dialog options and even some quests are determined by your characters attributes and skills.

Two moderate critiques: First, there is very little information about the character's background or the recommendations for character design in the readme. The meeting with the DM is fantastic, but this occurs after you've already selected a character. I think it would have been nice to have a lot of that info in the readme. Prospective players should note that while your character has humble beginnings, there are appropriate mentors available in town for any chosen class. The scripting of the mod is such that the backstory surrounding your mentor in town will shift depending on your character class (which, by the way, is a REALLY cool feature that I've never seen implemented to this extent before).

Second, it seemed as though my character had some sort of inkling, from the very beginning, that Saleron had some knowledge of my character's father. And yet he didn't say anything about this until the end of the mod. Maybe some of the dialog should be examined for consistence on this point...

Overall, though, this is a fresh, polished, and very fun module. I've played the 2nd and 3rd chapters as well, and they just improve upon what the author was able to do in this module. Definitely an overlooked series at this point! –B