I just wanted to give a shout out that the Overlooked Module Project has released their December list of overlooked NWN1 modules. One of them is one I added to the list a while back, Elena's Tale: Roses for Rosa, which is an absolutely delightful short module. Here are their December selections: 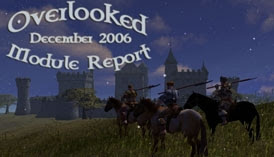 * The Cup of Akbar - Act I. Big punch for only a 2.5 MB size mod - both desert and underground environments - doesn't seem to have any bugs. (rec'd by Steve Savicki) Currently 785 downloads and 5 votes.

* Elena's Tale - Roses for Rosa. It's a very charming, very short (~45 min) module, with a number of small but nice innovations. (rec'd by Berliad) Currently 1189 downloads and 25 votes.

* A Grim Fate for the King - Chap 1. If you like a challenging, good combat, surprise filled, atmospherical, well thought out mod for low level characters, this is it. (rec'd by lebowski and ericdoman) Currently 3029 downloads and 14 votes.

* Missing Persons. This mod made for a very enjoyable evening. Overall, it starts off somewhat routine, but the interweaving of the various plot lines and the way they come together at the Castle is very well done. (rec'd by El Dano) Currently 562 downloads and 12 votes.

* Wendel's Woes. A fun, albeit brief, module. Considering it was made by a Hall of Fame creator, the low number of downloads and votes is rather perplexing. (rec'd by Alklau) Currently 1175 downloads and 21 votes.

Readers who know me may remember that I was actively involved in this project over the past year. I recently decided to step down from my responsibilities in that group to pursue other interests, one of which includes operating this blog. I'm delighted to see that they (primarily caesarbear) are soldiering onward. Also, I'm sure that they'd welcome additional faces around there, both in managing the project and making suggestions for overlooked modules. So head over to their thread if you're interested in participating.
Posted by Berliad at 1:20 PM