Before I left town, I wanted to post my comments about Adam Miller's recently-released Pirate Cards mini-game:

My Vote: 8 - Excellent, Recommended to Anyone
Like Demon Cards, Pirate Cards is a brilliant bit of scripting and a pretty fun little mini-game. I put 6-8 hours into it this week, and generally had a good time. The custom music, and especially the vocal track, is outstanding (though I'd prefer to be able to turn it off, because after playing for 6-8 hours it can get overly repetitive). The voice acting talent is pretty good, though the recording quality isn't in some cases--you hear a lot of "puffs" on the microphone, which is hard for me (at least) to ignore. I did find the playing arena to be a bit bland--not much different from Demon Cards', and that's a shame given the possibilities in the new toolset. Also encountered a few bugs (see previous post) 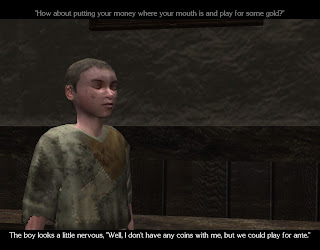 The game itself is very addictive, to the point that you'll tell yourself "just one more game" for over an hour --especially if you're after a particular card. It should make for a great distraction in the Dark Waters campaign. I do hope, unlike Demon, that you'll encounter more and more players over the course of the campaign rather than have all card-related activities confined to that one bar...sort of like Pazaak was used in KOTOR/KOTOR2.

At this point, while I'm sure many players could take me down with ease, my deck of elves and spells is sufficient to have a ~90-100% success rate against everyone except the elf player, who gets me around a third of the time. It was fun to optimize it, and the game in which I won that final winged elf girl was a "woot!"ing moment. My favorite NPC opponent is the dwarf, because he goes all out with the craziest cards in the game. 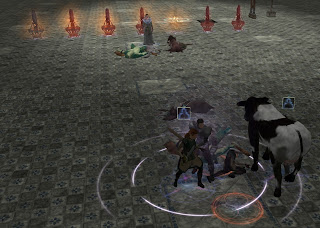 But at this point, I'm not really interested in pursuing the other deck options. I'm sure some players will try every combination they can imagine, but I'm satisfied until Dark Waters comes out. I do think that the online competitions that must be starting right now are probably where this game really shines...but I'm just not into online gaming. :)

Looking forward to your upcoming campaign!

Happy Holidays everybody! -B
Posted by Berliad at 12:25 AM