This was a fun, challenging little hack 'n slash romp, just like what was advertised. After playing the OC for the past month, it feels so good to be able to focus on a single, low-level character in battle...just like old times. :) My paladin did well for herself, though she did rely on rest to keep healthy--healing pots are not abundant, which gives every successful hit from a foe an added sense of tension. For such a low-level module, the variety of foes (mostly undead) that you face is nice, and I felt threatened, though still capable, throughout the module. So kudos on getting the balance worked out so well. I also appreciated that you made the keep a bit more interesting than your generic hallway/rooms set up that you often see in this sort of dungeon crawl. 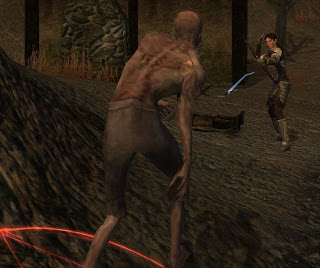 A few minor points. First, the lesser shadows (nice effect by the way) don't seem to have the unarmed fighting feat, as I kept getting an attack of opportunity when fighting them. They might have been too tough, of course, if they did have that feat. Second, the utility of this module as a "starter" module is hampered a bit by the "monty haul" nature of the items you receive. By module's end, my paladin had magical gear in every equipment slot and had gotten her AC up to 27. I will, unfortunately, probably need ditch everything and re-equip to use her in another module. Otherwise she'll be way too powerful.

Still, I had a fine time playing this. It's a great little effort, and I can see how you were able to learn most of the major functions of the toolset while creating it. Looking forward to your next work! :) -B