Finally back to work on FRWCC 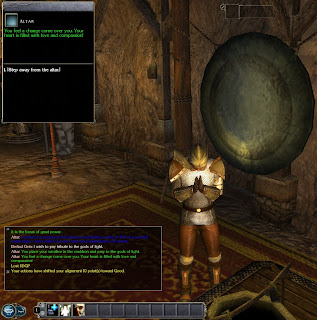 It's been a busy couple of weeks, but I finally squeezed in a few hours of work on the character creator tonight. My primary focus was to write and script the alignment-shifting altar. I have to say, I'm amazed at how easily it came together. I have almost no clue what I'm doing in that scripting editor, but I somehow managed to get it working tonight. My jaw literally dropped when everything seemed to be working as planned...on the first try, no less!

Everything seems to be basically complete except that I'd like to add some sort of visual effect when the alignment shift happens, and I haven't figured out how to do that yet. I think it'll just be a small addition to the script, but I'll have to do some snooping to figure out how to attach a single-fire visual effect (I'm thinking "fx_bard_ins_song_cast") to a character. I did that sort of thing once before when I was working on a nwn1 module, but I think I was using Gestalt's cutscene scripts at the time and therefore had prepackaged visual effect invocation scripts. Shouldn't be too difficult a thing to do though.
Posted by Berliad at 2:37 AM