I'm up and running!

NWN2 is finally up and running. I had some trouble getting it to re-install. Kept running into read errors or something as the dvd drive was trying to switch between different files during during the installation. I don't know if the problem was the dvd (it looks clean and undamaged) or my dvd drive. But I managed to rip a dvd image, mount it onto a virtual drive, and install from there. I have to have the actual DVD in the real drive to run the game (thanks SecuRom), but at least it finally worked. I'll deal with any additional hardware issues later, 'cause I wanna play a game for once. 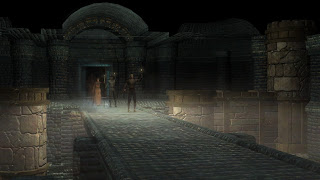 Which means I was able to spend some time playing Dark Waters. It's a really interesting module. About as light in the combat department as you can get, and the puzzles have (mostly) been a lot of fun. I still am really enjoying the voice acting, and I got reasonably far into the module tonight. The two main companions are extremely well done, and tonight I finished a sequence involving conversations with an odd chap--the voice acting really brought it to life. Overall, I'm very impressed. I think what I've learned from this is a) voice acting can actually be done well by the community, and be a great strength of a module, and b) that one should focus on the good talent and just leave the other lines silent.
Posted by Berliad at 1:57 AM