After last month's disappointment, when no modules were eligible, the August '07 NWN2 Hall of Fame class is probably the strongest yet:

Dark Waters 1: Highcastle by Adam Miller
Here's an excerpt from my comments on this module: 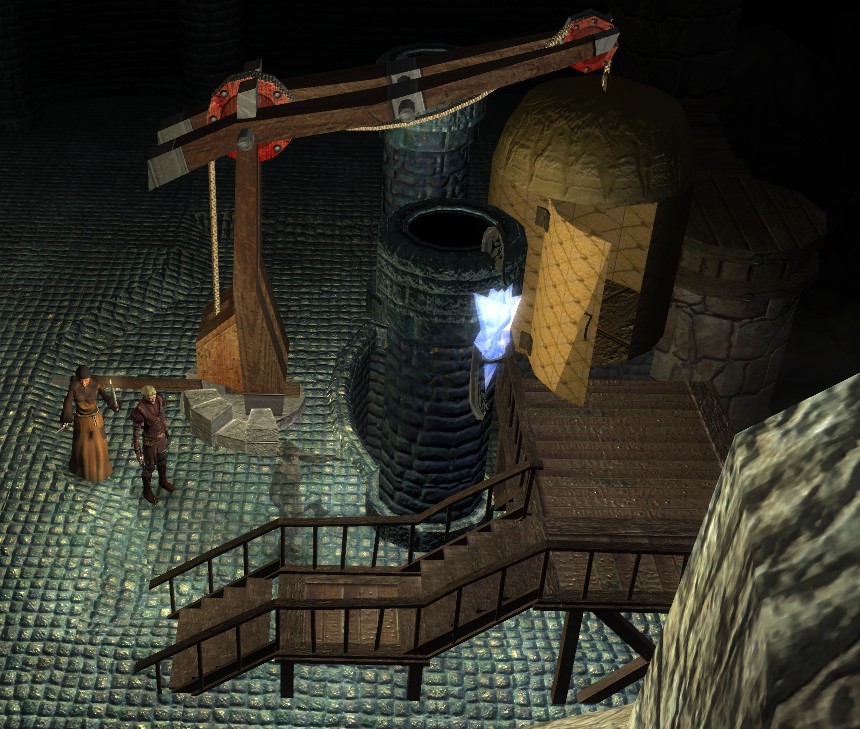 It's a wonderful setting. I guess you could call it Final Fantasy meets Waterworld--a very cool blend of traditional swords 'n magic fantasy with late 1800's-style technology, all set in an interesting post-cataclysm world that is just starting to come back to life. It's very deep and well-conceived, with a unique history, class structure, and feel. The setting alone makes it worth checking this module out.
...
But what really impressed me--and in this way, it reminded me a lot of Dreamcatcher 2--were the variety and creativity of the various puzzles you encounter along the way. None were particularly difficult, but they were interesting and original, and often dazzling.

B2: Keep on the Borderlands by Enoa4
Excerpt from my comments: 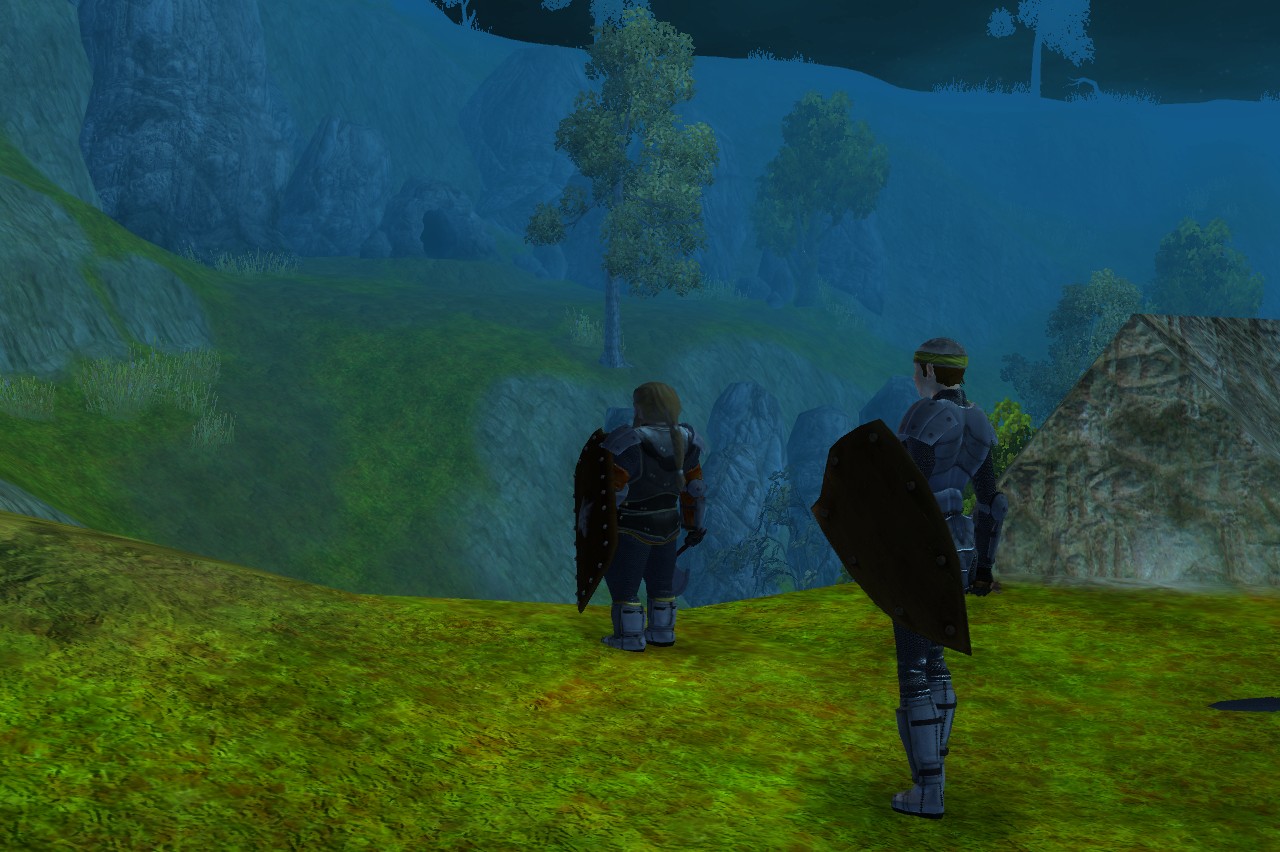 This is a fun, old fashioned, low-level D&D dungeon crawl. It's pretty straight and to the point -- there's a bunch of Bad Things living near the keep, and the local leader thinks it'd be great if you'd go kill them for him. So, off you go to the Caves of Chaos to slay evil and rid the area of their infestation. The thing I really enjoyed about this module was exploring the many intricate and interconnected dungeons that make up the many Caves of Chaos. Each cave housed a different tribe representing a different sort of monster, and each tribe had a "boss" leader of sorts that I needed to kill.

But while that sounds fairly simple, the caves are varied enough, and have enough twists, turns, and variable-sized chambers that it was hard to predict what lurked around each corner. Combat was pretty fast and furious at times, particularly before I advanced a few levels. Furthermore, the caves were interconnected such that sometimes accidentally stumble into a far more powerful tribe's territory, making for a harrowing few seconds as I re-organized my party to deal with the new threat.

Night Howls with Nestlehaven by jackyo123
Unfortunately, I haven't yet finished this one. I'm probably 6-8 hours into it by now, and so far, it's clearly among the best modules I've played for NWN2. How well it finishes will probably be what determines the score, but I predict I'll rate it very high. Expect to see my mini-review of this mod sometime later this week, assuming I finish it in the next few nights.

It is a bit surprising that Nestlehaven has already inducted, though, as it doesn't seem like it has been out all that long, and modules must be available for three months prior to being eligible for induction. I first mentioned Nestlehaven here on my blog on May 29th, and I think it had been marked final for just about a week by that point. That would indicate that it shouldn't have been eligible for induction until September. What has happened is this. First, Nestlehaven went online initially as a public beta, which began May 5th. NWVault uses that date as the date of its first availability for the purposes of its inductions. Even so, it still wouldn't have been eligible until September, except that the HoF induction was delayed until the 5th of this month for whatever reason (Maximus gets busy).

The end result is that Nestlehaven was probably inducted a month too soon, which means that it is going to miss out on a month of being featured on the Vault's front page. That said, it's hard to claim that the module or its author was a victim here--with 173 votes and nearly 12,000 downloads, it's gotten plenty of attention. :) But I can see this being a bigger deal for modules that have had extended public betas, like Sgt. Why's Red Hand of Doom.

Other NWN2 Inductees
Also entering the Hall this month is one of the first custom tilesets for NWN2, Robinson Workshop's Deep Halls. It looks like amazing, and I look forward to seeing this in future modules.

NWN1 Inductees
I played two of the inducted modules for the NWN1 Hall of Fame, but only completed one of them:

Pirates of the Sword Coast by BioWare
Here's an excerpt from my comments, dated 17 October 2005:

The writing is generally quite good, with lots of fun Arrrr's and Avast's as you'd expect. The visuals are stunning, with a tremendous rural/island tileset that I hope to see in a lot more modules in the coming year, as well as some great aquatic and desert island placeables. There are also a ton of custom items, most of which are gags…I spent a lot of time chuckling to myself while playing this game. There are also a lot of custom sounds here, including great wave noises and some excellent voiceovers by the narrator pirate captain. Unlike the official campaign, the voice acting (at least what is there) is awesome. Finally, there was a modified and innovative new system of skillcheck dialog options, including not only persuade checks, but also bluff, intimidate, taunt, and wisdom checks.

Drow Tales: The Librarian's Tales by by Capn Gherkin
Unfortunately, I never finished this module. It had a wonderful opening set of cutscenes and a great concept for the story, but after only about an hour of gameplay, I encountered a faction bug that I was never able to avoid--probably due to blowing lots of stuff up with the included Sorcerer character. The combat was also a bit over-the-top for my tastes. Still, the setting was wonderful, and really seemed to capture the essence of Drow culture. I always had planned to go back and play it again once it had been updated, but eventually stopped checking back. I do remember contributing to the pre-publishing peer feedback on Beemerchick's Vault review, which seems like a pretty balanced take on the module.

Also joining the Hall, via NWN1's rule about series inductions, were the rest of Sethai's NWS modules. I played two of these, for which I'll post excerpts of my comments below:

NWS - Daenarian's Tears by Sethai (my favorite of the NWS series)
Except from my comments, dated 23 June 2005:

Daenarian’s Tears is the second I’ve played in Sethai’s NWS “series.” Given the rumors offered in the module description about a mage knowing of unknown power, I took my lv 13 lawful neutral wizard in this mod. I thought this module, while very short (which, of course, is part of the point), was very good and has a more interesting story and far better dialog then many of the larger and more elaborate modules on the vault. This module features some fairly heavy fighting, but ultimately it comes down to an interesting decision that the player has to make. Someone else on this board described it as a 3-way lose situation. I’m not completely sure I agree, but you’ll certainly have to make a tough choice here. Bravo on this – it’s so rare to see ambiguous choices in modules, and Sethai always seems to anchor his modules on these sorts of “character” decisions.

NWS - Cradle of Cold by Sethai
Excerpt from my comments, dated 5 July 2005

The story was decent, and there is a decision to make at the end of the mod, but it pales in comparison to the surprisingly deep stories of Sethai’s later two modules. Still, the premise is good enough to motivate one’s actions in the mod, which is fine given how short it is. This one is well polished from a technical standpoint, and there were no bugs or typos that I encountered. The end result is a fun little hack and slash romp, and as long as you don’t expect it to be much deeper than that, you won’t be disappointed. It’s a nice way to spend an evening, and I continue to love the concept of these Neverwinter Snowflake modules.

Also being inducted is Scarface's Persistent Banking System, which might be something I can use for my character creator. I'll have to check it out...

Congrats to all of the great authors and content creators who had their work inducted this month! We all appreciate your contributions to this community.
Posted by Berliad at 12:36 AM